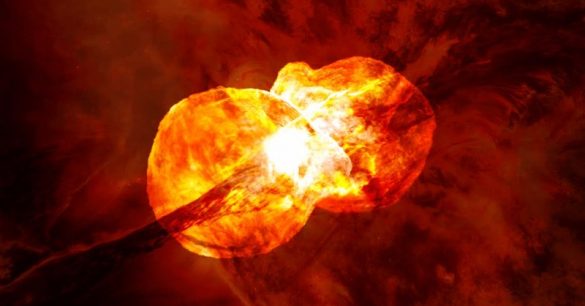 Stellar Collision: A New Star Will Be Visible on Earth

“If the prediction is correct, then for the first time in history, parents will be able to point to a dark spot in the sky and say, ‘Watch, kids, there’s a star hiding in there, but soon it’s going to light up.’”

Calvin College Dean Matt Walhout touted the discovery by one of his professors in a press release. Coming soon to a piece of the sky near you … two stars that make up a binary system will collide with each other and create a new star that will be clearly visible on Earth without a telescope. That prediction was made by Calvin College astronomer Larry Molnar at the recent meeting of the American Astronomical Society in Texas. He’s forecasting that the stars in the binary system KIC 9832227 will get close enough to explode in 2022 in a spectacular fashion that could be the brightest light in the sky. 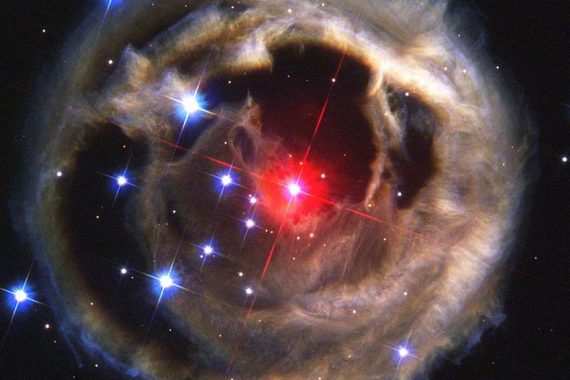 “Prediction” is a term that should be used loosely here, since the collision must have already occurred. KIC 9832227 is 1800 light years away, which means it happened 1795 years ago and the light from it will be arriving in 2022. However, its binary status was unknown until 2013 when Larry Molnar noticed that KIC 9832227, then thought to be a single pulsing star, was pulsing in an unusual way. Molnar gives student Daniel Van Noord, his research assistant, credit for the “Eureka!” moment.

“He looked at how the color of the star correlated with brightness and determined it was definitely a binary. In fact, he discovered it was actually a contact binary, in which the two stars share a common atmosphere, like two peanuts sharing a single shell.”

That prompted Molnar and his team to take different measurements of the changes in the pulse frequency and, over time, determined that the stars are on a collision course with their orbital period down to 11 hours and dropping rapidly. At that pace, estimated time of impact is predicted to be either 2022 or 2023 at the latest.

Probable location in Cygnus of the explosion

Molnar’s predictions on the explosion’s spectacular visibility on Earth come from observations made in 2008 of the merging of the contact binary system V1309 Scorpii which spawned a red nova seen by astronomers in the Optical Gravitational Lensing Experiment (OGLE), a Polish-run project using a telescope at the Las Campanas Observatory in Chile. He sees the light from KIC 9832227 becoming increasingly visible over a six month period in the constellation Cygnus. At its peak, it will be 10,000 times as bright as it is now, says Molnar.

“You won’t need a telescope in 2023 to tell me whether I was wrong or I was right. When this thing occurs, if it occurs, we will not miss it.”