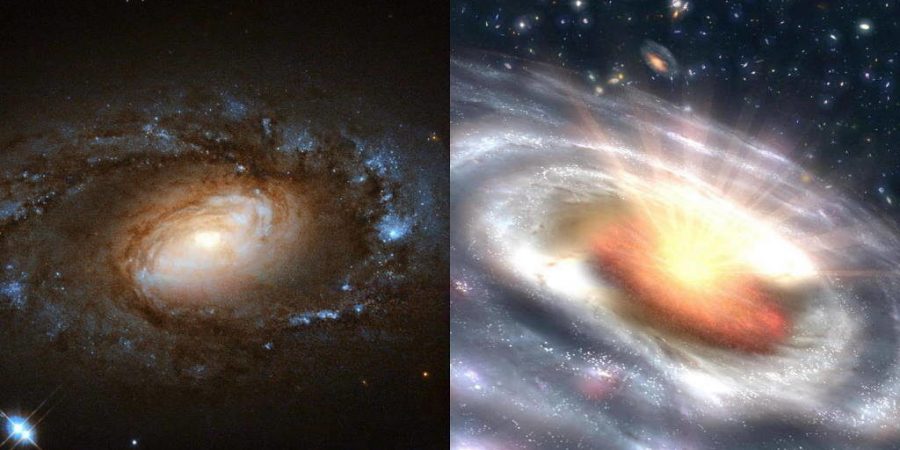 Galaxies come in a wide variety of shapes, sizes and brightnesses, ranging from humdrum ordinary galaxies to luminous active galaxies. While an ordinary galaxy is visible mainly because of the light from its stars, an active galaxy shines brightest at its center, or nucleus, where a supermassive black hole emits a steady blast of bright light as it voraciously consumes nearby gas and dust.

Sitting somewhere on the spectrum between ordinary and active galaxies is another class, known as low-ionization nuclear emission-line region (LINER) galaxies. While LINERs are relatively common, accounting for roughly one-third of all nearby galaxies, astronomers have fiercely debated the main source of light emission from LINERs. Some argue that weakly active galactic nuclei are responsible, while others maintain that star-forming regions outside the galactic nucleus produce the most light.

A team of astronomers observed six mild-mannered LINER galaxies suddenly and surprisingly transforming into ravenous quasars–home to the brightest of all active galactic nuclei. The team reported their observations, which could help demystify the nature of both LINERs and quasars while answering some burning questions about galactic evolution, in the Astrophysical Journal on September 18, 2019. Based on their analysis, the researchers suggest they have discovered an entirely new type of black hole activity at the centers of these six LINER galaxies.

“For one of the six objects, we first thought we had observed a tidal disruption event, which happens when a star passes too close to a supermassive black hole and gets shredded,” said Sara Frederick, a graduate student in the University of Maryland Department of Astronomy and the lead author of the research paper. “But we later found it was a previously dormant black hole undergoing a transition that astronomers call a ‘changing look,’ resulting in a bright quasar. Observing six of these transitions, all in relatively quiet LINER galaxies, suggests that we’ve identified a totally new class of active galactic nucleus.”

All six of the surprising transitions were observed during the first nine months of the Zwicky Transient Facility (ZTF), an automated sky survey project based at Caltech’s Palomar Observatory near San Diego, California, which began observations in March 2018. UMD is a partner in the ZTF effort, facilitated by the Joint Space-Science Institute (JSI), a partnership between UMD and NASA’s Goddard Space Flight Center.

Type 1 Seyfert galaxies are thought to face Earth head-on, giving an unobstructed view of their nuclei, while Type 2 Seyfert galaxies are tilted at an oblique angle, such that their nuclei are partially obscured by a donut-shaped ring of dense, dusty gas clouds. Thus, changing look transitions between these two classes present a puzzle for astronomers, since a galaxy’s orientation towards Earth is not expected to change.

Frederick and her colleagues’ new observations may call these assumptions into question. 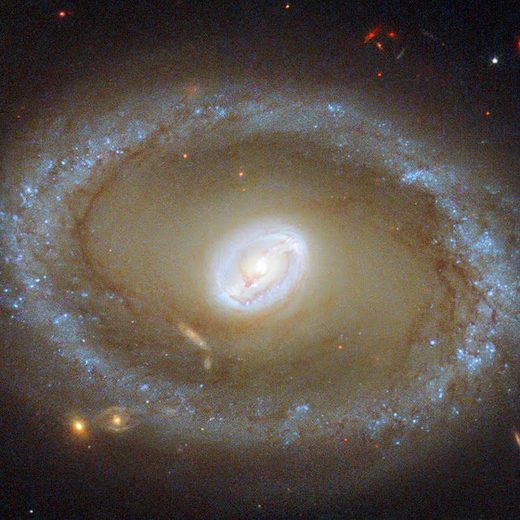 © R. Buta (University of Alabama/Image enhancement: Jean-Baptiste Faur
Spiral Seyfert Galaxy NGC 3081: Seyfert galaxies are one of the two largest groups of active galaxies, along with quasars. They have quasar-like nuclei with very high surface brightnesses whose spectra reveal strong, high-ionisation emission lines, but unlike quasars, their host galaxies are clearly detectable.

“We started out trying to understand changing look transformations in Seyfert galaxies. But instead, we found a whole new class of active galactic nucleus capable of transforming a wimpy galaxy to a luminous quasar,” said Suvi Gezari, an associate professor of astronomy at UMD, a co-director of JSI and a co-author of the research paper. “Theory suggests that a quasar should take thousands of years to turn on, but these observations suggest that it can happen very quickly. It tells us that the theory is all wrong. We thought that Seyfert transformation was the major puzzle. But now we have a bigger issue to solve.”

Frederick and her colleagues want to understand how a previously quiet galaxy with a calm nucleus can suddenly transition to a bright beacon of galactic radiation. To learn more, they performed follow-up observations on the objects with the Discovery Channel Telescope, which is operated by the Lowell Observatory in partnership with UMD, Boston University, the University of Toledo and Northern Arizona University. These observations helped to clarify aspects of the transitions, including how the rapidly transforming galactic nuclei interacted with their host galaxies.

“Our findings confirm that LINERs can, in fact, host active supermassive black holes at their centers,” Frederick said. “But these six transitions were so sudden and dramatic, it tells us that there is something altogether different going on in these galaxies. We want to know how such massive amounts of gas and dust can suddenly start falling into a black hole. Because we caught these transitions in the act, it opens up a lot of opportunities to compare what the nuclei looked like before and after the transformation.”

Unlike most quasars, which light up the surrounding clouds of gas and dust far beyond the galactic nucleus, the researchers found that only the gas and dust closest to the nucleus had been turned on. Frederick, Gezari and their collaborators suspect that this activity gradually spreads from the galactic nucleus–and may provide the opportunity to map the development of a newborn quasar.

“It’s surprising that any galaxy can change its look on human time scales. These changes are taking place much more quickly than we can explain with current quasar theory,” Frederick said. “It will take some work to understand what can disrupt a galaxy’s accretion structure and cause these changes on such short order. The forces at play must be very extreme and very dramatic.”