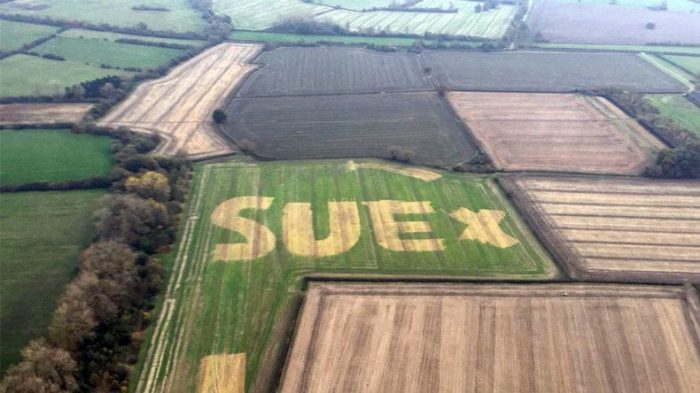 The National Police Air Service (NPAS) sought the public’s help in identifying the mysterious ‘Sue’ whose name was etched on a farmer’s field in Testworth, near Thame, on Thursday.

NPAS Benson spotted the colossal love note at roughly 8:50am local time Thursday, reports The Oxford Mail. Initial efforts at tracking “Sue” down reached a dead end, so the service took to Twitter to ask for help. The NPAS consists of civilian pilots with either military or commercial helicopter flight experience.

Let’s see if we can use the power of social media to #FindSue! Please share far and wide! #p1526 https://t.co/7vBbqgOpHw

Naturally, speculation was rife that it was a publicity stunt or an oddly specific message from an alien race. However, relief came just hours after the NPAS tweeted, when a local Oxfordshire Helicopter charter company revealed it was a simple display of affection from a husband, one of their pilots, to his wife.

It looks like @NPASBenson have spotted the #FindSue message that one the the @TopFlightHeli team Dad’s has written for his Wife! https://t.co/pZTSNkTKnG

Thanks for the info ppl, we’ve managed to track down Sue! She’s remaining anonymous and the sign is a personal msg! @BBCNews #FindSue #p1526 https://t.co/7vBbqgOpHw

The ‘x,’ which typically signifies a kiss, threw some amateur detectives off, leading them to believe the Suex underwater scooter company was behind the message; An odd choice for a marketing campaign, most would agree.

Apart from the social media buzz and the police involvement, perhaps the most impressive outcome of this love note was that it was, allegedly, visible from space.

Darn, this one has allegedly been solved. Here is what they say is behind the whole thing:

The enigma sparked a slew of conspiracy theories on social media ranging from an iPhone X advert to an alien invasion, but sadly the truth of the matter turned out to be somewhat more mundane.

According to reports, farmer George Graham had created the message in an effort to apologize to his wife, Sue, for being too grumpy all the time.

He created the letters by selectively spraying the crops using a GPS-operated tractor.

“I’m not quite as grumpy and old as perhaps I make out occasionally,” he said.

“As ever, everything has its ups and downs, so I thought I’d try and make a gesture at some point, and that was the one I chose.”