Seismic event indicators say Earth is moving through the middle of the second earth change uptick period for the 2017 Earth orbit cycle relative to the Black Star positioned in the Libra Constellation.

Year-over-year weekly seismic-event values show that Earth is following the 2014 earthquake pattern and with and extremely-low number of 2.5 to 4-magnitude earthquake events providing more evidence that the predicted earth change lull period for October 2017 has arrived on schedule.

Week-over-week seismic-event values show another decrease in earthquake-event values for Week 34 providing strong evidence that Earth is moving through the predicted mini-lull period. Clear evidence is seen, by looking at the steady decline in the 2.5 to 4-magnitude earthquake events from Week 30 (Jolt value) through Week 34 were we see the 158 events earned a red value. The projection is to see the current mini-lull period to end with weekly seismic-event values continuing to bounce up and down, until we see the biggest flurry of earthquake activity coming for the second two weeks of November 2017 pushing into December. 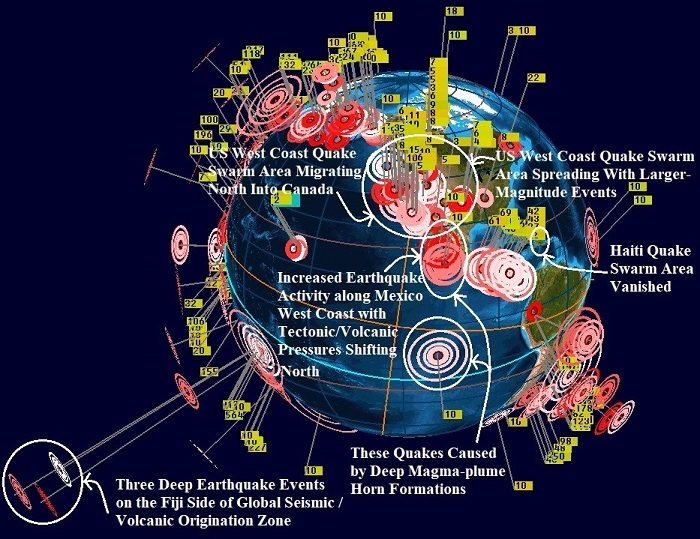 Earth saw three deep earthquake events on the Fiji side of the Global Seismic/Volcanic Origination Zone increasing tectonic/volcanic pressures from Fiji across to South America turning north where the formation terminal end is projected to be positioned off the southern border of the United States. The region described above as, “Increased Earthquake Activity along Mexico with Tectonic/Volcanic Pressures Shifting North” includes these three earthquake events over the last seven days (USGS, USGS, USGS) ranging between 4.1 and 4.9-magnitude events. Include the 5.0 earthquake event to the south in the Central East Pacific Rise Area (USGS), and we see seismic activity associated with deep magma plume arm #2 where earth-change activity is steadily increasing to send seismic/volcanic pressures from the Global Seismic/Volcanic Origination Zone over to the Americas.

Notice that the Haiti Quake Swarm Area has vanished completely representing a sign that the global tectonic dynamic is shifting for a series of new seismic patterns to emerge, as the seismic/volcanic pressures continue shifting in the direction of the United States West Coast. This 4.5 Quake Event (USGS) struck west of Vancouver in the Cascadia Basin in the area where the deep magma plume formation arm #1 terminal end is projected to be located. The seismic-event patterns continue to provide evidence that the US/Canada West Coast is definitely the Converge Zone where deep magma plume formation terminal end #1 and #2 will collide later in the timeline to produce the Really Big One (link) predicted by many seismologists around the world. See the Russian Grim Report (link) for more information, as many see catastrophe coming for the United States with the destruction beginning in the west and moving east. The Cascadia Rising Exercises (link), along with the Jade Helm 15/WUEX 16 Exercises (link), have been carried out in anticipation of the Big One striking off the US/Canada West Coast, which is the end result of the seismic/tectonic scenario you see playing out as we speak. Everyone is wise to read the Operations Section of the Dakota Report (link) about Project Black Star for connecting the dots.

Earth saw three new volcanic eruption events with all taking place in the Indonesia/Fiji Seismic/Volcanic Origination Zone with two on the Indonesia side of the equation. We saw three new volcanic eruption events in the same region last week, on the low end of the volcanism scale, which in my mind is part of the reason for reduced seismic activity moving through the current mini-lull period. The forecast is for continued low/moderate new volcanic eruption activity, until we begin seeing more of the deep earthquake events in Earth mantle transition zone; between 410 and 666 kilometers below the surface. An increase of these deep quake events on the Indonesia side will send deep magma-plume shockwaves north along deep magma plume formation corridor #1 through the Philippines, Japan, Kamchatka and east through the Aleutians towards Alaska. More of these deep quake events on the Fiji side will send tectonic/volcanic pressures east towards South America turning north through Central America into Mexico.

Now is the perfect time to subscribe to the Survival Group Program at https://www.terral03.com/ for only 45 dollars per year, which includes a one-year subscription to Terral’s 2017 Newsletter. The USA Survival Group Program now has five group options with four in the Ozarks and one along the New Mexico/Texas border. Rebecca’s Primary Group Option Members are having a big meeting coming up in the first week of November, on the staging area property, allowing members to work together for creating the best survival strategy possible to increase the chances of survival for everyone involved. Subscribe now to the Newsletter Program and receive access to all the newsletters from 2012 through the end of 2018 for just 25 dollars per year. The 2017 Dropbox Folder providing the access also contains many research-related documents difficult to find on the internet. Newsletter and Survival Group Subscribers have benefits that include sending me questions on topics shared at https://www.terral03.com/ with selected questions/answer sessions placed in the Featured Section to help others.