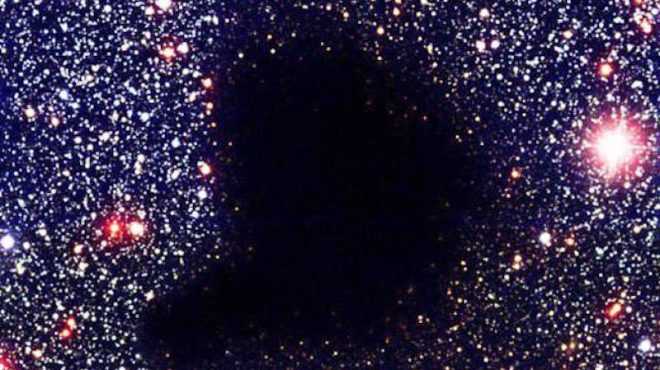 In 1981 astronomer Robert Kirshner made a shocking intergalactic discovery. 700 million light years from the Earth lies an enormous,barren sphere known as the Boötes Void. Its very existence challenges what we know about the universe and its origins. The Void is at least ten times larger than the rules of modern physics say is reasonably likely. As a structure, the Void verges on the impossible.

Yet, this disturbing formation is consistent with Nikolai Kardashevs 1962 theory of advanced alien civilizations and their behavior. Could it be home to a hyper-intelligent extraterrestrial species? A void is a massive region of space that holds either minimal or no galaxies. They are created when mass collapses, and is followed by subatomic particle implosions. With a diameter of 330 million light years,the Boötes Void makes up 0.27% of the observable universe. But according to established scientific understanding its huge size is impossible. The Big Bang theory states that the universe is 14 billion years old, and that it has been expanding exponentially since its birth. Given the age of the universe, there has only been enough time for voids to form that are tens of millions of light years across, not hundreds. Stranger still, is just how empty the Bootes Void is.

It contains only 60 galaxies, around 10,000 fewer than we should expect to find in such a vast expanse. Many believe this means the void is the first observable proof of a Kardashev scale III master race civilization. In 1964 Nikolai Kardashev – now Deputy Director of Russias Astro Space Centre – published his theory for extra terrestrial development,arguing that civilizations develop in 4 stages. A civilization reaches the third phase when it becomes so technologically advanced that it is able to convert starlight into usable energy. At this point, the species is able to replicate itself at astonishing rates,spreading out across the universe and colonizing galaxies. Many consider this is a necessary step for any civilization to avoid extinction. Could this explain the Voids chilling dearth of stars?

In 1960 theoretical physicist Freeman Dyson published Search for Artificial Stellar Sources of Infrared Radiation. This paper suggests that in order to harness the energy from stars, civilizations must construct huge artificial structures around them, essentially masking them from the outside. It is possible that networks of interlinked Dysons shells are distorting the appearance ofthe Void, and what lies within it. A further mystery is the almost perfectly spherical shape of the Void. It is what space blogger Michael Anissimov has called the most perfectly shaped vacuum in space. Could this be the result of an extraordinary piece of intergalactic engineering?

In 2015 astronomers at the University of Hawaii identified another supervoid, which, at 18 billion light years across, scientist István Szapudi described as the largest individual structure ever identified by humanity.Like the Bootes Void, existing models suggest that its too big to exist. This study also found that supervoids drain energy that travels through them. The impact is so intense that surrounding areas of space become unusually cold. While some suggest this might be caused by Dyson Spheres there may be a simpler solution. Scientist Greg Aldering points out that the galaxies within the Bootes Void are in a very clear tube formation. He argues that given how unlikely this alignment is, it is highly probable the Void was formed from smaller voids colliding and merging with each other.

The tubular arrangement is therefore what remains of the boundaries between smaller voids. While science has not yet been able to confirm this, NASA has publicly discussed this theory, suggesting that it has the gravitas that other ideas do not. Significantly, while the Void is perplexing,it is consistent with the Lambda-CDM model of cosmological evolution. This means that although it diverges from the standard model of the Big Bang Theory, scientists do not consider the variations great enough to undermine existing knowledge about our universe and its past. The only thing the Bootes Void offers proof for, is the mystifying nature of the cosmos.

Both Dyson and Kardashevs theories pre-date its discovery. Indeed, no professional scientific research has ever used their theories to provean observed phenomenon. This suggests the scientific community considers their ideas more a case of crackpot science than data-driven proof for ancient alien colonies. However, until scientists can fully explain the Bootes Void, we can’t eliminate extraterrestrial involvement from the equation.

Editor’s note: We also recommend that you give Who Are The Arcturians? a read.

YOUR DONATIONS WILL ENABLE USTO BRING YOU MORE LIKE THIS

IF YOU ENJOY THIS SITE PLEASE TELL OTHERS ABOUT US…SHARING IS CARING
Start the discussion below..