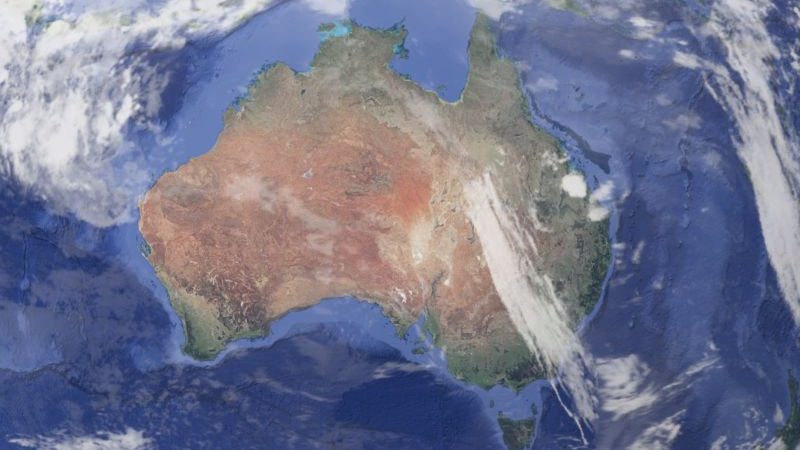 Our planet does some weird stuff that escapes our notice simply because of scale. The Earth spins faster during an El Niño year—or after some earthquakes—but we’re never going to miss a millisecond here or there. It’s also easy to forget that the plates that make up the Earth’s crust are in constant motion, changing various locations incrementally. In fact, Australia will be updating GPS coordinates again this year to correct the continent’s drift away from its last-mapped whereabouts.

But that’s not all. It turns out that Australia—yes, the entire continent—tilts and slides around in a little dance each year because of seasonal weather patterns around the world.

University of Newcastle researcher Shin-Chan Han uncovered this finding while fiddling around with satellite data. Earth-observing satellites can detect many of the small, weird things the Earth does and may even need to account for them to preserve their precision. The exact center of Earth’s mass, for example, is known to wander a bit.

That wandering center of mass is a response to small changes in the distribution of mass around the Earth. Like a giant beach ball (made of solid rock…), squeezing in one place causes a response in other places. A major seasonal squeeze on the Earth is supplied by a see-saw of water that shifts weight around Europe and northern Africa on one side and the South Pacific Ocean on the other.

Han used a model to simulate the effects of that see-saw on the Earth’s center of mass and on Australia’s piece of the Earth’s surface. The simulation showed that Australia was on the pivot line of that see-saw, meaning that there actually ought to be a detectable annual wiggle. If this was the only thing going on, a cursory glance at any GPS station would reveal such motion. But Australia sits atop a fast-moving tectonic plate, sailing north at a pace of about seven centimeters each year. On top of that, Australia gets its own little squeeze from seasonal water weight, and things like earthquakes can periodically add jolts of motion here or there.

The twin GRACE satellites measure minute changes in Earth’s gravitational pull to find other changes in mass—like melting ice sheets or drought-depleted aquifers. They naturally measure with respect to the current center of mass, but they don’t track its motion for you. The location of this center has to be supplied for all the other measurements to be accurate.

Sure enough, the recorded motion that still remained in the GPS data showed a coherent pattern. The continent moves about a millimeter to the northwest during summer and fall, and back to the southeast during winter and spring. At the same time, Australia tilts toward the direction it’s moving—for a total slope of about 5 millimeters over 3,500 kilometers.

That vertical motion is half to one-third the average motion caused by local water weight, but the horizontal motion is actually the largest factor after plate motion.

Not even the most prone to motion sickness will need Dramamine to stomach this slight seasonal swing, but it’s pretty fun to think about. It’s enough that we can calculate the physics behind it. The fact that we apparently have instruments sensitive enough to reveal it in the real world is pretty incredible.

Fun aside, this demonstrates another way to track the Earth’s center of mass—so it can be accounted for in ridiculously sensitive measurements like these.