“Infrasound, and the frequencies produced, might be a “physical mechanism” for thinning the veil between dimensions, or opening a doorway.”

INFRASOUND – sound waves that vibrate just below the range of human hearing, it has been dubbed the “fear frequency.”

Exposure to infrasound has been demonstrated to effect recipients with symptoms including fear, sorrow, depression, anxiety, nausea, chest pressure, hallucinations, and manifestations of beings of all sorts.

Infrasound can cause objects to move, and some believe the body’s internal organs can be effected. It is suggested that levels above 80 decibels at frequencies between 0.5 to 10Hz may start to effect the vestibular of the inner ear thus impacting balance and causing disorientation.

Infrasound is sound which extends below the range of human hearing (from 20 Hz down to 0.001 Hz), and it emanates from many natural and man made sources. Infrasound is characterized by an ability to cover long distances and get around obstacles with little dissipation. 20 HZ is generally the lowest frequency humans can detect via hearing.

Psychologist Richard Wiseman of the University of Hertfordshire believes the odd sensations that people attribute to ghosts may be caused by, and attributed to, contact with infrasonic vibrations.

The scientist is comforted by the view that these phenomenon are purely psychological in nature. Even to the extent of ignoring evidence, that they themselves have experienced, as you will soon discover.

However there is another obvious explanation for the effects of infrasound, that will disturb the scientists. Infrasound, and the frequencies produced, might be a “physical mechanism” for thinning the veil between dimensions, or opening a doorway.

In 1998, Vic Tandy and Dr. Tony Lawrence staff at Coventry University wrote a paper called “Ghosts in the Machine” for the Journal of the Society for Psychical Research. They cited infrasound as the cause of apparitions seen by staff at a so-called haunted laboratory in Warwick.

Several years earlier, Tandy was working late in the “haunted” Warwick laboratory when he saw a gray thing coming for him.

“I felt the hairs rise on the back of my neck,” he said. “It seemed to be between me and the door, so the only thing I could do was turn and face it.”

It reappeared in a different form the next day when Tandy was doing some work on his fencing foil.

“The handle was clamped in a vice on a workbench, yet the blade started vibrating like mad”. He wondered why the blade vibrated in one part of room but not in another. The explanation, he discovered, was that infrasound was coming from an extractor fan.

“When we finally switched it off, it was as if a huge weight was lifted,” he said. “It makes me think that one of the applications of this ongoing research could be a link between infrasound and sick-building syndrome.”

When the team measured the infrasound in the laboratory, the reading was 18.98 hertz–the exact frequency at which a human eyeball starts resonating. The sound waves made his eyeballs resonate and produced an “optical illusion’: Believing he saw a figure that didn’t exist.

Sleep paralysis also happens to be a common phenomena in geodynamic areas, known to produce infrasound, along the Pacific Ring of Fire, further supporting the link between infrasound and strange phenomenon.

On 31 May 2003 a group of UK researchers held a mass experiment where they exposed some 700 people to music “near the edge of hearing”.

The experimental concert (entitled Infrasonic) took place in the Purcell Room over the course of two performances, each consisting of four musical pieces. Two of the pieces in each concert had 17 Hz tones played underneath.

The presence of the tone resulted in a significant number (22%) of respondents reporting anxiety, uneasiness, extreme sorrow, nervous feelings of revulsion or fear, chills down the spine, and feelings of pressure on the chest. 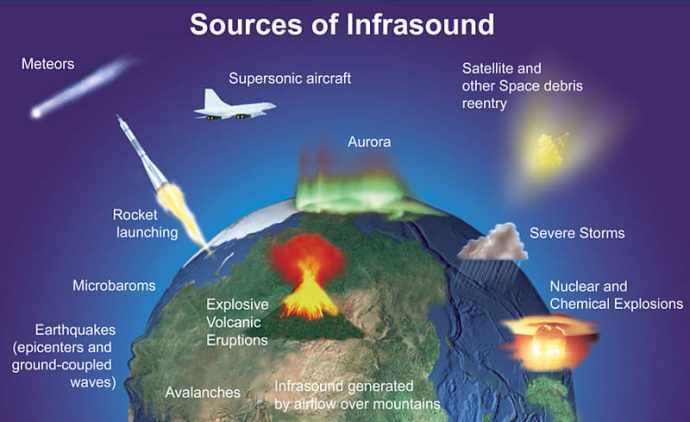 There are two types of infrasound, naturally forming and man-made. Natural sources that can produce infrasound include:

Animals such as whales, elephants, giraffes, sumatran rhinoceros, alligators, tigers, and migrating birds communicate over long distances using infrasound. Some animals are sensitive to these low frequency vibrations and may appear to “foresee” approaching storms and earthquakes.

Some buildings or natural features can act as Helmholtz resonators and create infrasound at high levels. Ancient places of worship or ceremonial burial such as the Maeshowe mound in Orkney, have been shown to act in this way.

It is possible that any room with an open doorway or window can operate like a Helmhotz resonator, similar to blowing a column of air across an empty bottle. Subsonic sound can travel long distances, pass through walls and may be amplified in tunnel like structures. Standard hearing protection is of little use for subsonic sound as it often can pass straight through and may even be amplified. There have been links reported between supposedly haunted locations and the presence of infrasound, which is the reason paranormal investigators may monitor infrasound levels whenever possible.

Infrasound can also be man-made. Some sources of man-made infrasound are nuclear and chemical explosions, engines, machinery and airplanes.

Infrasonic waves propagate with very little attenuation and hence are capable of propagating over great distances.

The locations where the bodies are typically found (in or near bodies of water, dried creek beds, and mountains) happen to produce infrasound naturally. Severe weather is often experienced for days directly after the person goes missing.

In these areas, as many as 30 people may have been recorded as going missing on separate occasions, every case containing the same bizarre, often unexplainable details.

Sometimes people who have gone missing return, they remember some of what happened and what they describe is a memory of being in an alternate version of the place from which they originated.

The sky and features of their location changes somewhat and has a different look. Sometimes they see people around them but the people can’t see them in turn.

Strange, otherworldly creatures are said to interact with the missing. They report hearing familiar voices calling them and some people remember being grabbed, and even have marks on them from where they were forcibly pulled.

The stories have a lot in common with reports that were often linked to fairy or elf abductions in earlier centuries. The missing person seems to vanish into some kind of alternate version of time and reality, where they are often helped or communicated with by other creatures, new animals or tiny men. Sometimes the other creatures are benevolent and sometimes they are not.

Some will say it is possible that these unexplained disappearances occur because there are nexus spots around the world where the veil between dimensions is thinner. These areas may contain portals or inter-dimensional hot spots.

Children may be more susceptible to crossing over because they are less bound by the laws of our dimension, especially very young children and disabled children. It may be alien contact or even government experiments. It’s impossible to say.

However, infrasound seems to be a contributing factor one must consider. The evidence is too compelling.


You can also check out my e-book on Amazon: