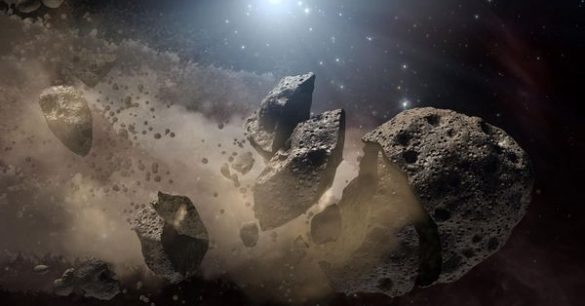 The Sun May Be Busting Asteroids into Tiny Pieces

While NASA struggles to find ways to destroy asteroids and meteors before they crash into the Earth, the Sun is doing its part by ripping asteroids apart at their cosmic seams and casting their tiny pieces into the solar wind. Should NASA try bumping space objects into a tight solar orbit so they get bumped off by the Sun?

Here’s another question. How would you like to have a nice cushy job tracking an asteroid only to have it suddenly and unexpectedly smashed to bits by the Sun along with the asteroid? According to a new report presented recently at the Division of Planetary Sciences meeting in Pasadena, California, that may be happening too. In 1983, astronomers discovered 3200 Phaethon – an asteroid with a comet-like tail (sometimes called a rock comet) and the first asteroid to be discovered using images from a satellite – in this case, the Infrared Astronomical Satellite (IRAS). 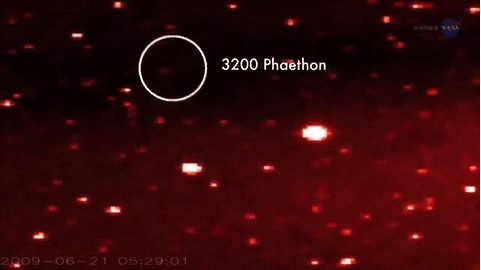 Phaethon was deemed an asteroid worth watching for more reasons that just its tail. It’s a rare Apollo asteroid, which means its orbit crosses that of Earth. Even more interesting, its orbit takes it closer to the Sun than any other named asteroid – its closest distance is half of Mercury’s closest approach.

Therein lies the problem, according to University of Western Ontario astronomer Paul Wiegert, one of those with the job (for now) of tracking 3200 Phaethon. Using the Canadian Meteor Orbit Radar (CMOR) he found that the rock comet appears to be breaking apart when it gets close to the Sun, only to get its pieces back together but not quite as tight as it moves away to its furthest distance away in the Earth’s orbital path. Wiegert calls it a “slow motion” breakup (named for Kardashian relationships?). 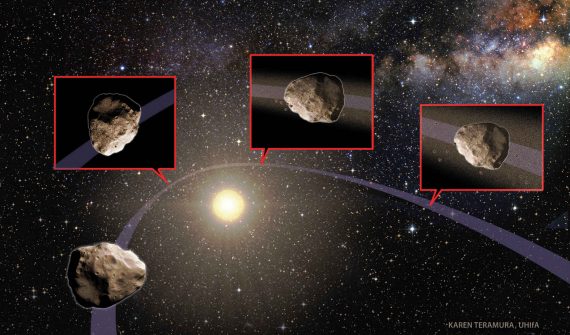 Asteroid breaking up as it moves past the Sun

Phaeton’s breakup isn’t being caused but an asteroid love triangle but there could be three reasons for it. It may be cracking under the Sun’s heat. Volatile materials inside it may be creating massive explosive pressure as they move from solid to gas. Or that same solid-to-gas conversion could be causing Phaeton to spin rapidly until its gravity can no longer hold it together.

Whatever the cause, it’s only a matter of time before it breaks apart. The pieces don’t appear to be dangerous to Earth since they’re mere millimeters in size. So far, Wiegert and his fellow Phaeton followers still have a job. However, to be on the safe side, they’ve begun tracking Comet 322P/SOHO 1 which is exhibiting similar breakup behavior, indicating it may be an asteroid like 3200 Phaethon.

Should NASA engineers try bumping rogue asteroids into a tighter solar orbit and let the Sun break them up? Maybe they should practice at billiards first.