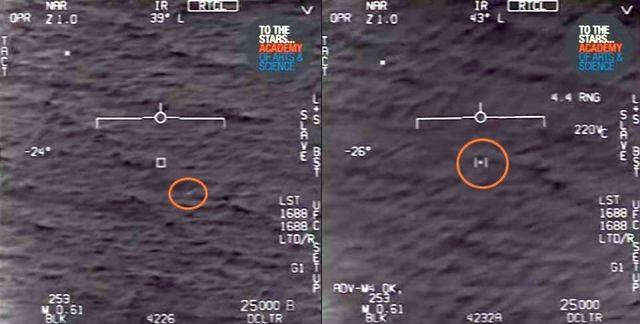 GO FAST is the third, and latest of (at the time of this post) three official USG videos selected for release after official review by multiple government organizations. While To The Stars Academy of Arts & Science was the first to obtain a copy, it should be available to any member of the press or public via the Freedom of Information Act. This footage was captured by a U.S. Navy F/A-18 Super Hornet using the Raytheon ATFLIR Pod that was being operated by a highly trained aerial observer and weapons system operator whom the government has spent millions of dollars to train. Go Fast reveals a Navy encounter that occurred off the East Coast of the United States in 2015 and the object in view remains unidentified.

Here is the other two videos:

Gimbal: The First Official UAP Footage from the USG for Public Release

Exclusive analysis brought to you by To The Stars Academy of Arts & Science. Gimbal is the first of three US military videos of unidentified aerial phenomenon (UAP) that has been through the official declassification review process of the United States government and has been approved for public release. This footage, and all official USG footage you will see on TTS Academy’s community of interest (COI), comes with essential chain-of-custody documentation validating that it is received in its original and unaltered form and is authentic. The US Department of Defense uses this process in order to meticulously ensure that information and material retain their integrity without revealing sources and methods. This documentation is what sets this footage apart from anything else that has made its way to the public domain, by establishing its authenticity and thereby giving it enormous historical significance.

Exclusive analysis brought to you by To The Stars Academy of Arts & Science: FLIR1 is the second of three US military videos of unidentified aerial phenomenon (UAP) that has been through the official declassification review process of the United States government and approved for public release. It is the only official footage captured by a US navy F/A-18 Super Hornet present at the 2004 Nimitz incident off the coast of San Diego. Like Gimbal, this footage comes with crucial chain-of-custody (CoC) documentation because it is a product of US military sensors, which confirms it is original, unaltered, and not computer generated or artificially fabricated. While there have been leaked versions on the internet, the CoC establishes the authenticity and credibility that this version is the original footage taken from one of the most advanced sensor tracking devices in use.