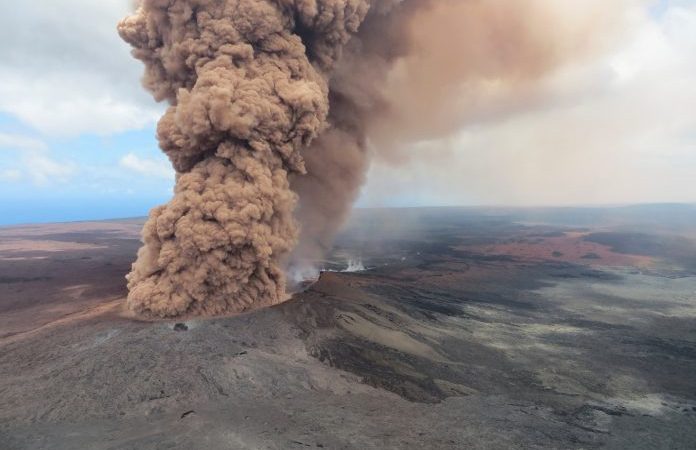 It’s not just Hawaii! No! The U.S. has 169 volcanoes that could erupt anytime. There are potentially active volcanoes all over the West and Alaska as well as Hawaii, and about 50 are considered high priorities for monitoring. Here is where to find them.

Volcanoes are full of tricks. They can build to a major eruption in a crescendo of shudders and spatters or explode with almost no warning. They can lie in wait under a magnificent snowcap, the centerpiece of a landscape of beauty that they could obliterate tomorrow, or in 10,000 years, or never again. And there are more of them in more parts of America than you might think. Here’s a rundown of where they are.

The United States Geological Survey counts 169 potentially active volcanoes in the country — some of them straight-from-the-textbook conical mountains topped with craters, and others that hardly look the part at all. About 50 of them in six states are rated high priority or highest priority for monitoring. A few have been active in modern times; others last erupted hundreds or even thousands of years ago.

Hawaii
The state’s land mass owes its very existence to volcanoes: Each island is the product of at least one. The Big Island has five, including Mauna Loa, the largest active volcano anywhere on earth.

Kilauea, the one that has lately been opening new fissures, spewing lava and forcing evacuations, has been erupting in one way or another continuously since the early 1980s. Mauna Loa has erupted 33 times in the last 175 years, and Loihi, a submarine volcano about 20 miles offshore, erupted in 1996. Farther north and west, the islands are older and quieter geologically; Maui’s only active volcano, Haleakala, is believed to have erupted most recently at least 400 years ago.

Though it has attracted many a visitor to Hawaii Volcanoes National Park over the years, Kilauea’s long-running eruption has taken a significant toll. The Hawaii Center for Volcanology notes that over one nine-month period, it destroyed more than 100 houses.

Alaska
Hawaii often gets the headlines, but Alaska has the numbers: At least 50 volcanoes have been active in the state since 1760, attracting substantial attention from volcano watchers and researchers. Many are concentrated along the arc of the Aleutian Islands, part of the “Ring of Fire” around the Pacific Ocean where earthquakes and eruptions are most common.

One of them is more worrisome than usual right now. Scientists at the Alaska Volcano Observatory have a yellow alert in effect for Mount Cleveland, where they have been detecting seismic and thermal activity and occasional ash clouds.

Like most of Alaska’s volcanoes, Mount Cleveland is in a strikingly remote, unpopulated area. But four of them are close enough to Anchorage, the state’s largest city, to be a potential worry.

The gravest problem that Alaskan volcanoes regularly pose, though, is not on the ground but thousands of feet in the air. Researchers estimate that 80,000 large aircraft fly over or near Alaska’s volcanoes each year, making them vulnerable to volcanic ash. When a commercial jetliner flew through ash in 1989, all four engines briefly shut down, and the aircraft dropped 13,000 feet in just eight minutes. It managed to land safely in Anchorage.

Pacific Coast
From Canada to Mexico, the American West is dotted with volcanoes. Some are in the Sierra Nevada, like the Long Valley Caldera, believed to have last erupted about 16,000 years ago. Others help make up the Cascade Range in rural Oregon and Washington.

One is Mount St. Helens, about 50 miles from the Portland area, which erupted explosively in 1980, causing an avalanche of debris and wiping out forests and wildlife for miles. American officials say it is “the most likely of the contiguous U.S. volcanoes to erupt in the future.” Another is Mount Rainier, the tallest of the Cascades, soaring scenically near Seattle and Tacoma; it last erupted about 1,000 years ago. Lassen Peak, less than 60 miles from Redding, Calif., erupted most recently in 1917, creating the eerie landscape of Lassen Volcanic National Park. Mount Hood and Mount Shasta have each erupted in the last few hundred years.

Wyoming and the Rockies
Volcanoes are not always individual mountains. There are volcanic fields scattered across the West where scientists have found cones, lava flows and signs of relatively recent eruptions.

One of America’s most popular national parks, Yellowstone, is home to volcanic activity that has been playing out for about two million years. Indeed, it is responsible for some of the park’s most spectacular sights.

The park was profoundly shaped by a “supereruption” about 640,000 years ago. An event like that today would bury parts of Colorado, Idaho, Montana, Utah and Wyoming in several feet of ash, and ash could end up as far away as Chicago, Los Angeles and St. Louis.

But such an event — or even a milder one that would interrupt a Yellowstone vacation — is highly unlikely to happen without a lot of advance warning, according to the Geological Survey: “Yellowstone hasn’t erupted for 70,000 years, so it’s going to take some impressive earthquakes and ground uplift to get things started.”

Scientists watch Yellowstone for signs of action, but the other volcanoes sprinkled through the Mountain States are seen as so low risk that they are not monitored.

Anywhere, really
Most volcanoes are where geologists would expect them to be — along the rough edges, cracks and hot spots in the earth’s crust — and have been around a long time. But it is not unheard-of for a new one to appear completely by surprise. Consider Paricutín, which rose from a Mexican cornfield starting in 1943. The New York Times noted in 1952 that it had given scientists “a unique opportunity for study, as it is the first volcano they have been able to examine daily from the moment of its ‘birth.’ ” Paricutín is now dormant, but its history remains central to understanding the science of volcano development.

Does that mean the 1997 movie “Volcano,” about lava suddenly welling up under Los Angeles, might come true? Well, probably not. Though there are active earthquake faults in the city, the earth’s crust is not moving there in a way that tends to produce volcanic activity.