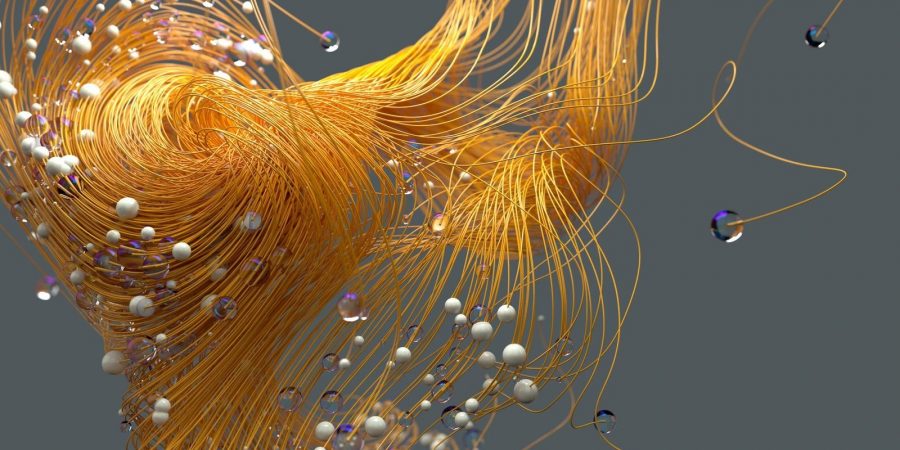 The Milky Way, the galaxy we live in, is one of hundreds of billions of galaxies strewn across the universe. Their variety is stunning: spirals, ring galaxies shaped like star-studded loops, and ancient galaxies that outshine virtually everything else in the universe.

But despite their differences, and the mind-boggling distances between them, scientists have noticed that some galaxies move together in odd and often unexplained patterns, as if they are connected by a vast unseen force.

Galaxies within a few million light years of each other can gravitationally affect each other in predictable ways, but scientists have observed mysterious patterns between distant galaxies that transcend those local interactions.

These discoveries hint at the enigmatic influence of so-called “large-scale structures” which, as the name suggests, are the biggest known objects in the universe. These dim structures are made of hydrogen gas and dark matter and take the form of filaments, sheets, and knots that link galaxies in a vast network called the cosmic web. We know these structures have major implications for the evolution and movements of galaxies, but we’ve barely scratched the surface of the root dynamics driving them.

Scientists are eager to acquire these new details because some of these phenomena challenge the most fundamental ideas about the universe.

“That’s actually the reason why everybody is always studying these large-scale structures,” said Noam Libeskind, a cosmographer at the Leibniz-Institut for Astrophysics (AIP) in Germany, in a call. “It’s a way of probing and constraining the laws of gravity and the nature of matter, dark matter, dark energy, and the universe.”

Why are distant galaxies moving in unison?

Galaxies tend to form gravitationally bound clusters that belong to even larger superclusters. Earth’s long-form cosmic address, for instance, would have to note that the Milky Way is part of the Local Group, a gang of several dozen galaxies. The Local Group is inside the Virgo supercluster, containing more than 1,000 galaxies.

On these more “local” scales, galaxies frequently mess with each other’s spins, shapes, and angular velocities. Sometimes, one galaxy even eats another, an event known as galactic cannibalism. But some galaxies show dynamic links across distances too great to be explained by their individual gravitational fields.

For instance, a study published in The Astrophysical Journal in October found that hundreds of galaxies were rotating in sync with the motions of galaxies that were tens of millions of light years away.

“This discovery is quite new and unexpected,” said lead author Joon Hyeop Lee, an astronomer at the Korea Astronomy and Space Science Institute, in an email. “I have never seen any previous report of observations or any prediction from numerical simulations, exactly related to this phenomenon.”

“The observed coherence must have some relationship with large-scale structures, because it is impossible that the galaxies separated by six megaparsecs [roughly 20 million light years] directly interact with each other,” Lee said.

Lee and his colleagues suggest that the synchronized galaxies may be embedded along the same large-scale structure, which is very slowly rotating in a counter-clockwise direction. That underlying dynamic could cause the kind of coherence between the rotation of the studied galaxies and the motions of their neighbors, though he cautioned that it will take a lot more research to corroborate his team’s findings and conclusions.

While this particular iteration of weirdly synced up galaxies is novel, scientists have observed odd coherences between galaxies at even more mind-boggling distances. In 2014, a team observed curious alignments of supermassive black holes at the cores of quasars, which are ancient ultra-luminous galaxies, that stretch across billions of light years.

Led by Damien Hutsemékers, an astronomer at the University of Liège in Belgium, the researchers were able to observe this eerie synchronicity by watching the universe when it was only a few billion years old, using the Very Large Telescope (VLT) in Chile. The observations recorded the polarization of light from nearly 100 quasars, which the team then used to reconstruct the geometry and alignment of the black holes at their cores. The results showed that the rotation axes of 19 quasars in this group were parallel, despite the fact that they were separated by several billion light years.

The discovery, which was published in the journal Astronomy & Astrophysics, is an indicator that large-scale structures influenced the dynamics of galaxies across vast distances in the early universe.

“Galaxy spin axes are known to align with large-scale structures such as cosmic filaments but this occurs on smaller scales,” Hutsemékers said in an email, noting that theoretical studies have proposed some tentative explanations of this process.

“However, there is currently no explanation why the axes of quasars are aligned with the axis of the large group in which they are embedded,” he noted.

The truth behind synchronized galaxies could change everything

The secret of these synchronized galaxies may pose a threat to the cosmological principle, one of the basic assumptions about the universe. This principle states that the universe is basically uniform and homogenous at extremely large scales. But the “existence of correlations in quasar axes over such extreme scales would constitute a serious anomaly for the cosmological principle,” as Hutsemékers and his colleagues note in their study.

However, Hutsemékers’ cautioned that more of these structures would need to be spotted and studied to prove that this is a serious wrinkle in the cosmological principle. “Other similar structures are needed to confirm a real anomaly,” he said.

For the moment, the dynamics behind these quasar positions are not well understood because there are few observational techniques to refine them. “As far as large-scale alignments are concerned, we are essentially waiting for more data,” Hutsemékers’ said. “Such studies are statistical and a step forward would require a large amount of polarization data, not easy to gather with current instrumentation.”

Future radio telescopes, such as the Square Kilometre Array, might be able to probe these mysterious alignments in more detail.

Quasar alignments are not the only hurdles that oddly synchronized galaxies have presented to established models of the universe. In fact, one of the most contentious debates in cosmology these days is centered around the unexpected way in which dwarf galaxies appear to become neatly aligned around larger host galaxies such as the Milky Way.

But over the past decade, new observations have revealed that a huge chunk of the satellite galaxies around the Milky Way are synced up into one tidy orbital plane. At first, scientists wondered whether that simply meant something weird was going on with our own galaxy, but a similar plane of satellites was then observed around Andromeda.

The alarm bells really started ringing in 2015, when astronomers published observations of the same phenomenon a third time around Centaurus A, an elliptical galaxy about 10 million light years from the Milky Way.

This discovery “suggests that something is wrong with standard cosmological simulations,” according to a subsequent 2018 study in Science, led by Oliver Müller, an astronomer at the University of Strasbourg in France.

“At the moment, we have observed this at the three closest galaxies,” Müller said in a call. “Of course, you can always say that it’s only three, so it’s not statistical yet. But it shows that every time we have good data, we find it, so it could be universal.”

In a 2015 study, Libeskind and his colleagues suggested that filaments in the cosmic web might be guiding these organized galaxies, a process that could cohere with the ΛCDM model. Ultimately, though, there’s no conclusive answer to this dilemma yet.

“One of the great things about science is that you can have a model built with thousands of pieces of data but if one thing doesn’t stick it starts to crack,” said Libeskind. “That crack either has to be sealed or it’s going to bring the whole house down.”

The next generation of galaxy research

This tantalizing uncertainty has motivated astronomers like Marcel Pawlowski, a Schwarzschild Fellow at AIP and co-author on the 2018 Science study, to make this problem a focus of their research. Pawlowski is looking forward to data from the next generation of huge 30-meter class observatories that could show whether other big galaxies are surrounded by either isotropic or organized patterns of satellite galaxies.

“What we have to do now is expand our search to more distant satellite systems, and find satellite galaxies as well as measure their velocities,” said Pawlowski in a call.

“The field really advanced because of this debate going on in the literature,” Pawlowski added. “It’s been really good to see how the observational evidence became more and more solid.”

Whether it’s the strange motions of dwarf galaxies in our own galactic neighborhood or the eerie alignment of galaxies over millions or billions of light years, it’s clear that the dance moves of galaxies are an essential key to unlocking the large-scale structure of the universe.

The galaxies we see captured in static positions in beautiful deep-field shots are actually guided by many complex forces we don’t yet fully comprehend, including the cosmic web that undergirds the universe.

“What I really like about this stuff is just that we are still at the pioneering phase,” said Müller. “That’s super exciting.”