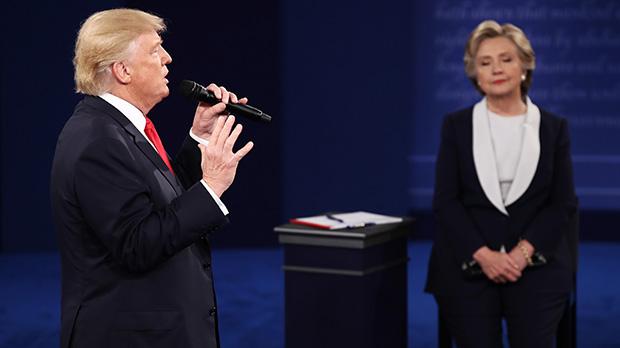 Donald Trump has backed down on one of his major campaign pledges to prosecute his Democratic rival during the race for the White House.

Throughout his election campaign, Trump hit out at Clinton over the investigation into her use of a private email server during her role as secretary of state, suggesting he would launch a fresh investigation if he won the White House.

The US president- elect said he does not want to “hurt” Hillary Clinton or her family.

Trump made the statement during an interview with CBS on Sunday, trying to dodge questions about a pledge to prosecute Clinton once he takes office.

However, he took a vague tone when asked if he ever was going to probe Clinton and her family, whom he frequently referred to as “Crooked Hillary” during the campaign.

“I don’t want to hurt them,” he repeated. “And I will give you a very, very good and definitive answer the next time.”

One day after his historic victory over Clinton on November 8, Trump took a reconciliatory tone in his victory speech and said all Americans owed the former secretary of state “a major debt of gratitude for her service to our country.”

This is while, during the presidential debates, Trump had openly threatened to imprison Clinton over her use of a private server to exchange thousands of emails with potentially sensitive content.

The US Federal Bureau of Investigation (FBI) has twice cleared Clinton of all charges relating to her possible mishandling of government secrets, drawing fire from Trump and his supporters.

Trump has also accused Clinton and President Barack Obama of creating the Daesh (ISIL) Takfiri group in Iraq, saying they were responsible for the group’s expansion into Syria and other countries around the world.

Clinton’s support for the 2003 US Invasion of Iraq was another attacking point used by Trump.

Additionally, the New York businessman has accused Clinton of mishandling the 2012 attack against the American consulate in the Libyan city of Benghazi, which led to the death of Ambassador Chris Stevens and three other Americans.

Spearheading a Western military intervention in Libya that facilitated the overthrow of the African country’s former ruler Muammar Gaddafi was another crime committed by Clinton, according to Trump’s campaign.

However, Clinton later on revealed that Trump himself had “extensively” supported attacking Libya.