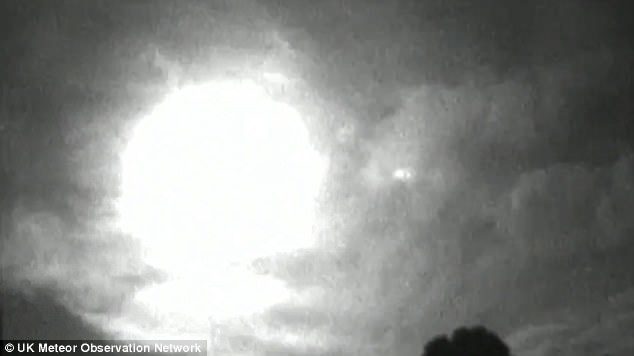 Two huge fireballs were widely seen across the country as they blazed across the skies this weekend.

Dozens of skywatchers reported spotting the first meteor which flew over England, Wales and northern France shortly after midnight on Saturday.

Several even said they heard rumbling and ‘multiple booms lasting 2-3 seconds’ as the object passed overhead although others said it was silent.

Experts classified it as a bolide, which is the term used when a meteor causes a flash as bright as the moon.

Footage of the fireball, filmed in Wilcot, Wiltshire, shows a bright dot rapidly getting bigger as it travels across the sky.

It culminates in a huge flash of light before quickly reducing in size until it disappears.

Another meteor was seen flying across the same region six hours later with some witnesses reporting that it appeared to break up in the sky.

‘There are multiple flashes as it breaks up. It would have happened at about an altitude of about 30km (19 miles).’

He added that the meteor would have measured about six inches across.