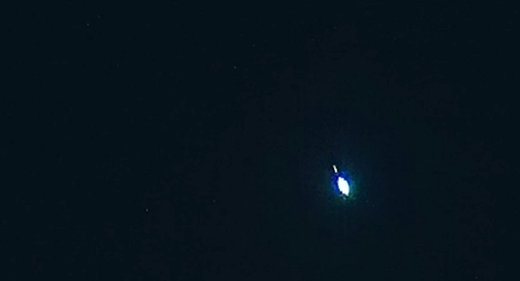 People across the country are reporting what is possibly a meteor shining bright as it passed overhead on Friday night.

The “huge fireball or space junk re-entry” was reported in the skies above the capital from about 7.30pm.

A resident in the Upper Hutt suburb of Totara Park said they thought it was space junk after seeing three bright objects.

“I came outside [for a cigarette] and something caught my eye, it was very, very bright and moving fast.

“It was phenomenally big, it was glowing orange in the middle with green on the sides – it was like a firework, it got brighter and brighter, whiter and whiter.” The object was seen heading south.

“It was halfway across the sky and took about four seconds to cross the ocean, I think it was quite close [to the ground].

It’s probably one of the most phenomenal things I’ve ever seen.”

Paul Andrews was travelling south on Wellington’s Happy Valley Road when it flew overhead. “It was a very bright fluorescent green colour with quite a long tail, looked like it was breaking up as it was getting closer to crashing into the ocean. “It seemed very close, almost looked like it was going to land out in Cook Strait.”

Mark Stanton, who saw the object from Upper Hutt, said it was either “huge or very close”. But it wasn’t just Wellingtonians who saw it. Amberlie Hernandez said she spotted the object from New Plymouth.

Christchurch woman Kellie, who did not give her surname, said she and her daughter also saw it about 7pm. “It was super bright with a hint of green in it. Very pretty to see. Thought it was more than just a shooting star.”

Margaret Tate was driving home toward Rangiora when she thought she saw a shooting star. “It was surrounded in green and fell suddenly from the sky, disappearing in a split second, amazing and slightly spooky because of the colour,” she said.

Carter Observatory staff could not be reached for comment.

A similar object was spotted over New Zealand in mid-July, with experts deeming it to be “space junk”, burning up on its re-entry into the atmosphere.

Second Meteor Fireball in a Week, Third So Far this Year, Streaks across San Diego Sky

Another mysterious bright light streaked across the Southern California sky on Thursday evening, for at least the third time this year.

The bright streak was reported by nearly 50 witnesses to the American Meteor Society (AMS) as blue or green, and was captured on dashcam video and posted to social media.

CHECK THIS OUT! Bright light shooting across sky tonight ? @10News viewer sent me this amazing video. I'm live at 11 pic.twitter.com/R94e31wHdk

Witnesses posted descriptions of what they saw on the AMS website, with many users writing that it resembled a fireball or comet.

“I have seen meteor showers but have never seen anything like this. It appeared much larger and brighter and closer,” Amy T, from Encinitas wrote.

The National Weather Service stated on Friday morning that they are unsure of what it was.

On Monday, another strange and unexplained light flew through the sky over San Diego.

Speaking to a local television station, city resident Ruben Quintana described what he saw as a stream of light that “began as a single blur [and] then expanded into a straight line” before vanishing.

Another witness had described it as a “strange aircraft with lights on the bottom.”

Many speculated that the sighting could have been related to the Perseid meteor showers this month, but Steve Flanders of the Palomar Observatory reported that it did not fit the profile of a meteor and was more likely a military rocket.

“A meteor will move across the sky far more quickly than in this case,” he told NBC, explaining that it appeared to be consistent with a military rocket launch. “The tail looks like the flames that escape from a rocket engine during ascent.”

In April, there was another stunning giant green fireball that streaked above San Diego.

“Saw it just as I pulled into Playas. The way the tail sparkled I thought it was really big fireworks. Very cool,” user SeahawkTJ wrote on Reddit.

US Strategic Command stated that they did not believe it was a man-made object, as it did not appear in their database of satellites.