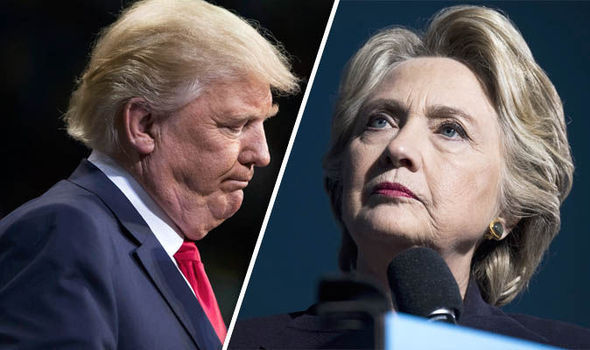 THE MYSTERY of aliens, UFOs, and what the government actually knows about extra terrestrials will be a focal point of the third and final US Presidential debate if a former MoD investigator gets his way.

Nick Pope, who investigated the UFO phenomena for the UK MoD in the 1990s, and now gives talks as conferences across the globe, wants to capitalise on the recent Wikileaks email disclosures, which again placed Hillary Clinton and her campaign manager John Podesta at the forefront of the mysterious subject.

Emails of Mr Podesta’s, made public by Wikileaks, showed he had been in contact with the late former astronaut Edgar Mitchell, a key believer that aliens visit Earth, and former Blink-182 frontman Tom DeLonge, now a UFO researcher, over the subject.

Now Mr Pope is trying to ensure the opportunity for the topic to fly during the final debate in the University of Nevada, Las Vegas, next Wednesday, is not missed.

Mr Pope has written a number of tweets on the issue, hoping it will catch the eye of the debate host.

He tweeted: “If Chris Wallace @FoxNewsSunday asks about UFOs in the third Presidential debate it’ll be the ultimate curveball question. #AskAboutUFOs.”

This followed an earlier one saying: “The latest WikiLeaks revelations make a question on UFOs a genuine possibility at the final Presidential debate. An intriguing prospect.”

And before that he said: “I hope Trump won’t use the #PodestaEmails to smear Hillary as a UFO nut.

Mr Pope told Express.co.uk: “I hope it generates a lot of interest.

“Given the recent WikiLeaks revelations and the persistent rumours of cover-ups and conspiracies, I think it’s time to clear the air and get this subject into the open.

“Also, given the toxicity of the campaign and the aggression in the second debate, a question on UFOs wouldn’t just be interesting, it would be fun – and I think that’s what US politics needs right now.”

Mr Pope is hopeful the subject will come up, particularly as the debate is being held in Las Vegas, not far from the infamous Area 51 Top-Secret US Air Force base in the Nevada desert, which has been linked to aliens by conspiracy theories.

He added: “This is already the weirdest US election in history, so nothing would surprise me.

“The fact that the WikiLeaks document dumps contain emails about UFOs has generated significant mainstream media coverage, and the moderator will want to ask questions that reflect what everyone’s talking about.

“If the moderator doesn’t ask about it, Trump may bring it up himself. He’s so far behind in the polls and so rocked by scandal that he needs a nuclear option.

“Maybe he’ll try to paint Clinton as a conspiracy nut. And there’s always the outside possibility that one of the candidates knows something about UFOs that would put the other one completely off their stride.

“The UFO community has lobbied for this for years. This may just be their moment in the sun.”

In January Mrs Clinton vowed to release as many classified UFO files as possible if she makes it into the White House, and Mr Podesta said his biggest regret while a senior aide to President Barack Obama was not getting “UFO disclosure”.

So far, Donald Trump has remained tight lipped on the subject.