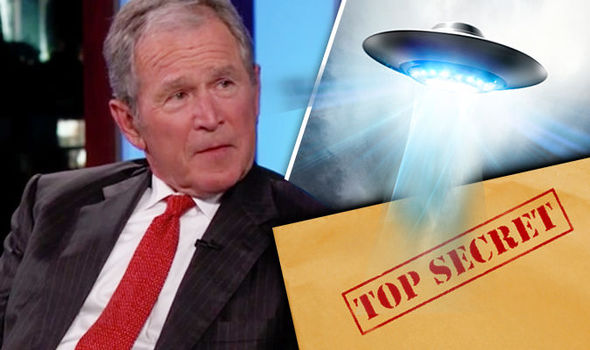 The former Republican President was quizzed about the White House’s top secret UFO files while appearing on the Jimmy Kimmel talk show.

Kimmel is known for broaching the subject and regularly ask guests such as Hillary Clinton about what they know.

So-called alien disclosure activists say they are convinced the White House has proof of alien visitations of Earth, but keeps it hidden due to a fear of the potential impact on religion and the rule of law.

Bush was put on the spot by Kimmel who asked him about his knowledge of the “secret file UFO documents”.

He asked Bush if he had gone through the classified documents while president – saying “it would be the first thing I would do”.

Bush, the 43rd President of the United States, was coy – and did not give much away, while appearing to confirm he had seen some information.

He then said he was giving nothing away, even “when 90” – suggesting he would take the secrets to the grave.

Kimmel asked again if Bush would tell him what was in the files, but his guest said “no”.

Kimmel said: “Now that you’re out of office you can do anything you want, right?”

Bush even said his “daughters asked the very same question” about revealing the UFO secrets of the White House.

The CIA has systematically been releasing declassified files from its archive and publishing them online.

Thousands of documents were published by the agency in January.

Among them were files that revealed CIA contractors claimed to have had contact with aliens, according to transcripts from experiments using “psychics” like Uri Geller.

There was, however, no definitive proof in the files that aliens have visited Earth.

UFO hunters have also repeatedly accused NASA of an alien cover up – pointing to mysterious “cuts” in the ISS feed while strange objects loomed into view.