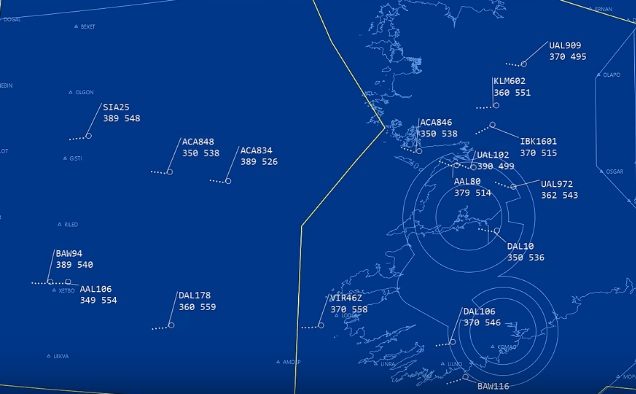 Here is a UFO sighted by various pilots which took place over Ireland two years ago.

You can skip to 5:05 mark if you want to go directly to the conversation between the pilots and ground control.
(video below transcript)

Conversation between pilots and ground control:

BAW94: Shannon, Speedbird 94?
EISN East ctr: Go Ahead.
BAW94: Is there any military traffics up right now?
EISN East ctr: There’s nothing showing on either primary or secondary.
BAW94: Okay, it was moving so fast and were just wondering what it was. Thank you.
EISN East ctr: Alongside You?
BAW94: It came up on our left hand side and then rapidly veered tot the north. We saw a bright light and then it disappeared at a very high speed. We were just wondering. We didn’t think it was likely collision course. We were just wondering what that could be.
IBK1768: …Meteor or another object making some kind of re-entry. Appeared to be multiple objects followinf the same sort of trajectory and very bright where we were.
EISN West ctr: Okay, that’s copied. Is there a direction it was going or anything?
IBK1768: (Answer not heard)
VIR76X: Virgin 76 also saw that in our 11 o’clock position, 2 bright lights.
EISN west ctr: Roger, that’s copied, thank you.
IBK1768: glad it wasn’t just me.
VIR76X: No, yeah, very interesting that one. Shannon, Virgin 76, we saw 2 bright lights 11 o’clock. Seemed to bank over tot the right.
EISN west ctr: Okay, we are passing that on now, thank you.
EISN east ctr: Speedbird 94, Shannon?
BAW94: 94, go ahead.
EISN east ctr: Okay, just so you know that other aircraft in the air have also reported the same thing. So we are going to have a look and see.
BAW94: The thing was astronomical.
EISN east ctr: Roger, thank you.