People across the Valley reported a loud booming noise and mysterious shaking of their windows and doors last night. 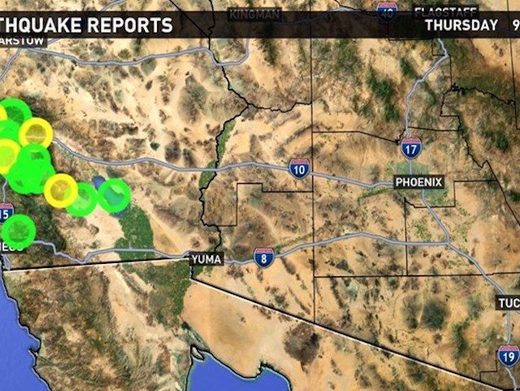 © Caribe Devine/12News
Earthquake reports March 2, 2017. None were reported in Arizona, though many viewers say they felt shaking.

Some took to Twitter, believing it was an earthquake. But the US Geological Survey reports no earthquakes of any magnitude for at least the last seven days.

Aviation experts said a high-altitude sonic boom could sound like a low rumble. Civilian aircraft are prohibited from flying at supersonic speeds over the continental U.S., but military aircraft are allowed to break the sound barrier.

However, most of the reports of loud booms were centered in the north Valley. According to airspace charts, commercial planes come into Phoenix from that direction, but some military training routes cross them at varying altitudes.

So far, no agency has admitted to flying at supersonic speeds over Arizona. A last possibility could be a meteor exploding at high altitudes.