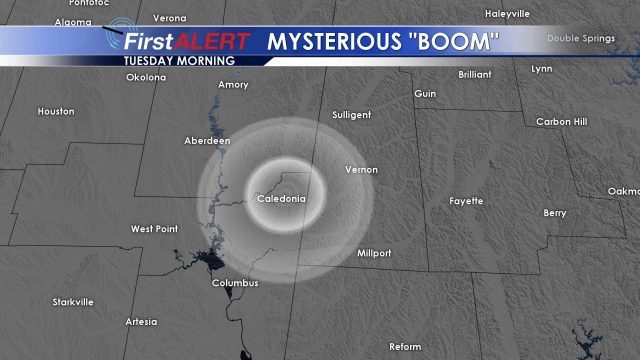 Many WCBI viewers wrote in asking about a mysterious boom Wednesday in Caledonia.

After reaching out to different organizations trying to determine what it could have been, the Columbus Air Force Base says the noise possibly came from a T-38 Talon as it took off for practice take offs and landings.

Master Sgt. Amanda Savannah says, there could have been a sonic boom from a functional check flight. However, it’s unlikely due to the altitude of the flight and it was 40 miles away from Caledonia.

So still no definite answer as to what caused the boom. We’re still looking into it.

A loud mysterious boom was reported by residents in Caledonia on Tuesday morning. The noise occurred just before 11:00 AM. Residents said it shook windows and it caught many by surprise. WCBI News followed up with local officials and more for answers.

We are still looking around to see just what might have occurred. Numerous reports have come from Northern and Central Alabama over the past few weeks of similar ‘boom’ noises, but no official cause has been determined from those either. We continue to work with local officials and our partner stations in Alabama to help find a cause of these mysterious noises.

If you hear a mysterious boom noise in your town, please call WCBI News at 662.328.1224 so we can continue collecting reports and find a cause to the noise.