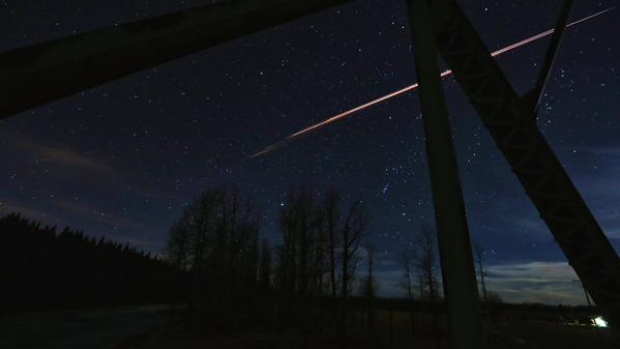 I was outside, enjoying a nice dinner and drink on a Montreal rooftop Tuesday evening when I saw it – a large fiery ball that blazed across the night sky. Then, as fast as it had appeared it was gone.

The entire incident, which occurred at around 9:30 p.m. ET, lasted all of five seconds, but the fear and paranoia set in for the rest of the night.

The end is near.

I took to the web to understand what had just happened. I was not prepared to rule out the possibility of alien invasion quite yet and neither were some in the Twitterverse.

Several people turned to Twitter to ask what the ball was.

Just saw a fireball over Syracuse, maybe? Anyone else?

People also took to reddit to discuss the nature of the possible flame.

To quash the skepticism CBC’s Homerun spoke with Andrew Fazekas, The Night Sky Guy and astronomy columnist with National Geographic.

“It sounds like a larger-than-usual meteor that ripped through the skies,” said Fazekas, adding that this event happens often, but not always in a populated regions.

The fireball, according to Fazekas, was spotted in southern Quebec and as far west as Ottawa. It was also seen in parts of New York state, including Buffalo and Syracuse. According to Fazekas, that means it had to have happened fairly high in the atmosphere, probably 50,000 to 70,000 kilometres away.

Fazekas, who also the author of Star Trek The Official Guide to Our Universe: The True Science Behind the Starship Voyages, said my alien hypothesis was quite unlikely.

“Every 15 minutes on any given night, you’ll see a shooting star. Usually it’s a grain of sand. This was a bit bigger and a bit more dramatic,” said Fazekas.

He also said it posed no real danger because meteors rarely hit the ground.

Did you see the fireball? Did you get a snapshot of it? You can tweet us @CBCMontreal.