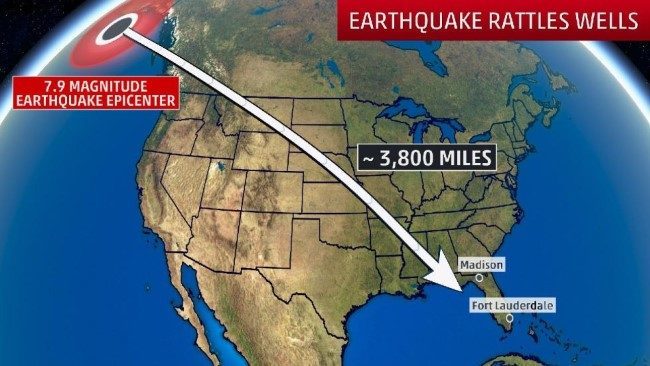 After Tuesday’s earthquake off of Alaska, some water levels in Florida went up, more than 3000 miles away.

Tuesday’s 7.9 magnitude earthquake in the Gulf of Alaska sent vibrations through the earth that caused water to rise and fall in wells in Florida, thousands of miles away.

Sensors near Fort Lauderdale and Madison, near the Georgia border, showed a minor change in water levels after the earthquake, according to the United States Geological Survey (USGS). 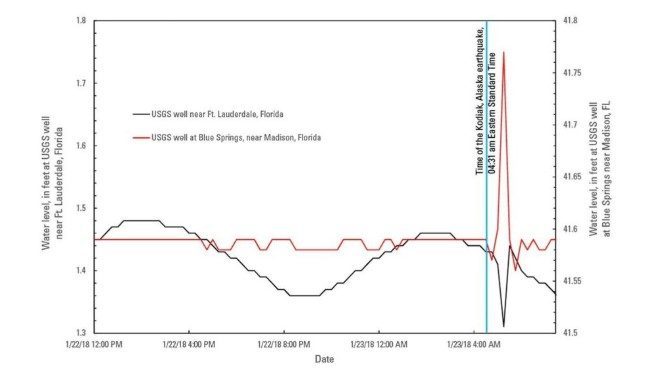 © USGS
The blue line is the time of the Gulf of Alaska earthquake Tuesday. You can see the small water displacement in both wells a short time later as indicated by the sharp upward motion of the red line (well near Madison) and the downward plunge in the black line (well near Ft. Lauderdale).

Why did water levels in these wells some 3,800 miles away from the earthquake’s epicenter change?

Vibrations that move through the earth called seismic waves are the culprit. Seismic waves are depicted by the upward and downward lines on seismographs used to detect earthquakes around the world.

“Water levels in wells respond to the seismic-wave induced expansion and contraction of the aquifer tapped by the well, in turn causing step or oscillatory fluid-pressure changes,” the USGS says.

The changes in groundwater levels are often seen hundreds, or even thousands, of miles away from an earthquake’s epicenter.

After an 8.5 magnitude earthquake near Alaska in 1964 water level changes were reported at 716 wells in the United States, according to the USGS.

Occasionally, changes can be extreme.

A 5.2 magnitude northwest Pennsylvania temblor in 1998 rendered dry about 120 wells for local homes for about three months.

The Denali, Alaska, 7.9 magnitude earthquake of 2002 caused a well in Wisconsin to rise 2 feet.