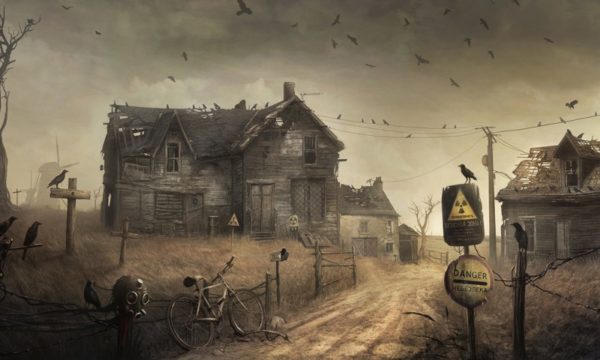 Welcome to the Apocalypse: Russians Warn US of Possible Nuclear Holocaust

We, the undersigned, are Russians living and working in the USA. We have been watching with increasing anxiety as the current US and NATO policies have set us on an extremely dangerous collision course with the Russian Federation, as well as with China.

Many respected, patriotic Americans, such as Paul Craig Roberts, Stephen Cohen, Philip Giraldi, Ray McGovern and several others have been issuing warnings of a looming a Third World War. But their voices have been all but lost amid the din of a mass media that is full of deceptive and inaccurate stories that characterize the Russian economy as being in shambles and the Russian military as weak—all based on no evidence.

But we—knowing both Russian history and the current state of Russian society and the Russian military, cannot swallow these lies. We now feel that it is our duty, as Russians living in the US, to warn the American people that they are being lied to, and to tell them the truth. And the truth is simply this:

If there is going to be a war with Russia, then the United States will most certainly be destroyed, and most of us will end up dead.

Let us take a step back and put what is happening in a historical context. Russia has suffered a great deal at the hands of foreign invaders, losing 22 million people in World War II. Most of the dead were civilians, because the country was invaded, and the Russians have vowed to never let such a disaster happen again.

Each time Russia had been invaded, she emerged victorious. In 1812 Napoleon invaded Russia. In 1814 Russian cavalry rode into Paris. On June 22, 1941, Hitler’s Luftwaffe bombed Kiev. On May 8, 1945, Soviet troops rolled into Berlin.

But times have changed since then.

If Hitler were to attack Russia today, he would be dead 20 to 30 minutes later, his bunker reduced to glowing rubble by a strike from a Kalibr supersonic cruise missile launched from a small Russian navy ship somewhere in the Baltic Sea.

The operational abilities of the new Russian military have been most persuasively demonstrated during the recent action against ISIS, Al Nusra and other foreign-funded terrorist groups operating in Syria. A long time ago Russia had to respond to provocations by fighting land battles on her own territory, then launching a counter-invasion; but this is no longer necessary. Russia’s new weapons make retaliation instant, undetectable, unstoppable and perfectly lethal.

If tomorrow a war were to break out between the US and Russia, it is guaranteed that the US would be obliterated.

At a minimum, there would no longer be an electric grid, no internet, no oil and gas pipelines, no interstate highway system, no air transportation or GPS-based navigation.

Financial centers would lie in ruins. Government at every level would cease to function. US armed forces, stationed all around the globe, would no longer be resupplied.

In a worst case scenario, the entire landmass of the US would be covered by a layer of radioactive ash.

We tell you this not to be alarmist, but because, based on everything we know, we are ourselves alarmed. If attacked, Russia will not back down; she will retaliate, and she will utterly annihilate the United States.

One false step, America, and this could be your fate…”

The US leadership has done everything it could to push this situation to the brink of disaster.

First, its anti-Russian policies have convinced the Russian leadership that making concessions or negotiating with the West is futile. It has become apparent that the West will always support any individual, movement or government that is anti-Russian, be it tax-cheating Russian oligarchs, convicted Ukrainian war criminals, Saudi-supported Wahhabi terrorists in Chechnya, or cathedral-desecrating punks in Moscow.

Now that NATO, in violation of its previous promises, has expanded right up to the Russian border, with US forces deployed in the Baltic states, within artillery range of St. Petersburg, Russia’s second-largest city, the Russians have nowhere left to retreat.

They will not attack; nor will they back down or surrender. The Russian leadership enjoys over 80% of popular support; the remaining 20% seems to feel that Russia is being too soft in opposing Western encroachment. But Russia will retaliate, and a provocation or a simple mistake could trigger a sequence of events that will end with millions of Americans dead and the US in ruins.

Unlike many Americans, who see war as an exciting, victorious foreign adventure, the Russians hate and fear war. But they are also ready for it, and they have been preparing for war for several years now. Their preparations have been most effective. Unlike the US, which squanders untold billions on dubious overpriced arms programs such as the F-35 joint task fighter, the Russians are extremely stingy with their defense rubles, getting as much as 10 times the bang for the buck compared to the bloated US defense industry.

While it is true that the Russian economy has suffered from low energy prices, it is far from being in shambles, and a return to growth is expected as early as next year. Senator John McCain once called Russia “A gas station masquerading as a country.” Well, he lied. Yes, Russia is the world’s largest oil producer and second-largest oil exporter, but it is also world’s largest exporter of grain and nuclear power technology. It is as advanced and sophisticated a society as the United States. Russia’s armed forces, both conventional and nuclear, are now ready to fight, and they are more than a match for the US and NATO, especially if a war erupts anywhere near the Russian border.

Such a fight would be suicidal for all sides.

We strongly believe that a conventional war in Europe runs a strong chance of turning nuclear very rapidly, and that any US/NATO nuclear strike on Russian forces or territory will automatically trigger a retaliatory Russian nuclear strike on the continental US.

Contrary to irresponsible statements made by some American propagandists, American antiballistic missile systems are incapable of shielding the American people from a Russian nuclear strike. Russia has the means to strike at targets in the USA with long-range nuclear as well as conventional weapons.

The sole reason why the USA and Russia have found themselves on a collision course, instead of defusing tensions and cooperating on a wide range of international problems, is the stubborn refusal by the US leadership to accept Russia as an equal partner.

Washington is dead set on being the “world leader” and the “indispensable nation,” even as its influence steadily dwindles in the wake of a string of foreign policy and military disasters such as Iraq, Afghanistan, Libya, Syria, Yemen and the Ukraine. Continued American global leadership is something that neither Russia, nor China, nor most of the other countries in the world are willing to accept. This gradual but apparent loss of power and influence has caused the US leadership to become hysterical; and it is but one small step from hysterical to suicidal.

America’s political leaders need to be placed under suicide watch.

First and foremost, we are appealing to the commanders of the US Armed Forces to follow the example of Admiral William Fallon, who, when asked about a war with Iran, reportedly replied “not on my watch.” We know that you are not suicidal, and that you do not wish to die for the sake of out-of-touch imperial hubris. If possible, please tell your staff, colleagues and especially your civilian superiors, that a war with Russia will not happen on your watch. At the very least, take that pledge yourselves, and, should the day ever come when the order to commit mass suicide is issued, refuse to execute it on the grounds that it is criminal.

Remember that according to the Nuremberg Tribunal: “To initiate a war of aggression is not only an international crime, it is the supreme international crime differing only from other war crimes in that it contains within itself the accumulated evil of the whole.”

Since Nuremberg, the excuse “I was just following orders” is no longer a valid defense; so please don’t make yourselves war criminals.

We also appeal to the American people to take peaceful but forceful action to oppose any politician or party that engages in irresponsible, provocative Russia-baiting, and that condones and supports a policy of needless confrontation with a nuclear superpower that is capable of destroying America in roughly one hour.

Speak up! — break through the barrier of mass media propaganda and make your fellow Americans aware of the immense danger of a confrontation between Russia and the US.

There is no objective reason why the US and Russia should consider each other adversaries.

The current confrontation is entirely the result of the extremist views of the neoconservative cult, whose members were allowed to infiltrate the US Federal government under President Bill Clinton, and who consider any country that refuses to obey their dictates as an enemy to be crushed.

Thanks to their tireless efforts, over a million innocent people have already died in the former Yugoslavia, in Afghanistan, in Iraq, Libya, Syria, Pakistan, the Ukraine, Yemen, Somalia and in many other countries, all because of their maniacal insistence that the USA must be a world empire—instead of a regular, normal country—and that every national leader must either bow down before them, or be overthrown.

In Russia, this irresistible force has finally encountered an immovable object. These neoconservative warmongers must be forced to back down before they destroy us all!

We are absolutely and categorically certain that Russia will never attack the US, nor any EU member state, that Russia is not at all interested in recreating the USSR, and that there is no “Russian threat” or “Russian aggression.”

Much of Russia’s recent economic success has a lot to do with the shedding of former Soviet dependencies, allowing her to pursue a “Russia first” policy. But we are just as certain that if Russia is attacked, or even threatened with attack, she will not back down, and that the Russian leadership will not “blink.”

With great sadness and a heavy heart, Russians will be forced to do their sworn duty and unleash a nuclear barrage from which the United States will never recover. 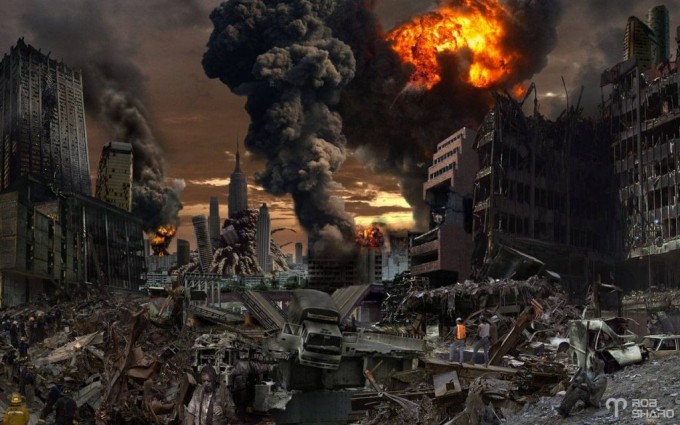 Even if the entire Russian leadership is killed in a first strike, the so-called “Dead Hand” will automatically launch enough nukes to wipe the USA off the political map.

We feel that it is our duty to do all we can to prevent such a catastrophe.

The Saker (A. Raevsky)
thesaker.is