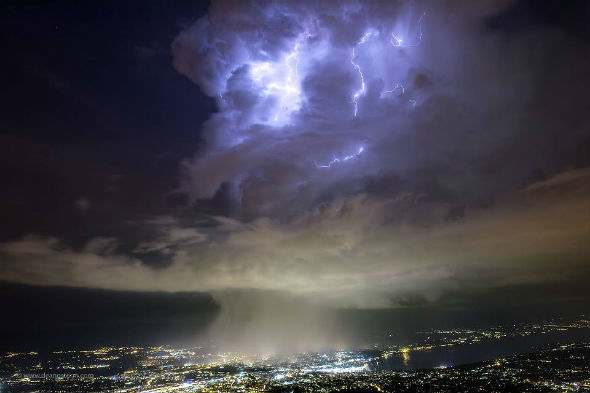 What Portal Did CERN Open Now? Strange Cloud Phenomenon Above the LHC

CERN is notorious for opening portals and then denying it; something very strange was captured in the clouds above the Large Hadron Collider just recently.

NEW images of bizarre cloud formations above the CERN Large Hadron Collider (LHC) could be shock proof the world’s biggest experiment is about to tear open a portal to another dimension.

Editors Addition: “This is not the first (and probably won’t be the last) time where strange happenings have been reported in the skies above CERN LHC (Large Hadron Collider). Also interestingly as stated in the vieo, CERN is not the only collider currently active, there are a others around the world.”

As express.co.uk reports, “video claims two images showing cloud and light over the LHC at Geneva on the French/Swiss border were taken on June 24 – the same day CERN scientists began a new Awake experiment to change the way it smashes particles together.

The film, entitled What portal did CERN open now? Strange Clouds Hover Above the LHC, was made by Freedom Fighter Times, a religious conspiracy theory channel on YouTube, and raises “major concerns” about what the LCH is being used for.

The narrator of the video of CERN, otherwise known as European Organisation for Nuclear Research, claims the two images had been forensically researched and been found to be genuine and not edited.

He said: “It is not a background you can get on Google. It is an actual picture taken on June 24 2016. It is directly over CERN, and the cloud formation is very interesting.

“The energy that is being produced, you can actually see that minus the lightening strikes.”

He asked viewers if they were concerned about CERN, and advised they should be.

He said: “How much energy did CERN pull into itself? Is this why the weather is so crazy all over the planet? There are many other colliders all over the world.”

The video showed the CERN schedule for the LCH which showed an experiment called awake was due to begin on June 24.

The narrator said: “Is it a coincidence they had just started the Awake experiment?”

“This insane ball of energy was directly over the LHC. Some people reported see faces in it. It is amazing they keep messing with nature and denying it.

“What is in the cloud – some say it is lightening or a massive ball of energy.

“The amount of energy pulling from nature into the collider itself, you can actually see it

“What portals and doors are being opened in this cloud?”

Some of the conspiracy theories about CERN have included that it is being used as a portal to allow Satan to return to Earth.

The LHC is the world’s largest and most powerful machine and is actually used to collide particles at close to the speed of light in a bid to discover more about physics and the possibility of parallel universes.

The curious machine developed across a 16-mile ring of superconducting magnets has had critics before amid claims it could inadvertently create a black hole that may swallow up the world, but some of these wild conspiracies are among the strangest to date.

CERN, of course, denies trying to change our weather, but it has carried out experiments to create artificial clouds to better understand global warming, which fuels the conspiracies.

The official line on what the Awake experiments are about is to develop a new type of accelerator to cut the size of the huge particle physics experiments down by a factor of a hundred or more so they can be carried out on table tops.

The AWAKE experiment, also known as the “Proton Driven Plasma Wakefield Acceleration Experiment,” will use a whole new method that will get particles going much faster in a shorter amount of time – results are not expected until 2018.