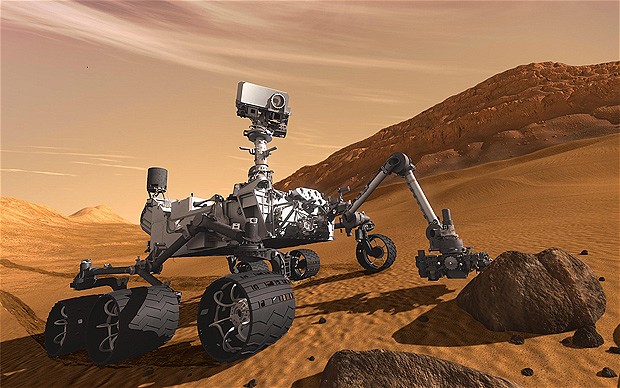 Some people are questioning the whole story of NASA’s rovers on Mars. They believe that the rovers were never sent to Mars.

But if NASA’s rovers are not on Mars, then where exactly are they?

First of all, evidence suggests that the pictures that we see on NASA’s website are not even taken by the Curiosity and Opportunity rovers. One of the known locations where NASA is playing around with these small rovers is Devon Island, Canada.

Sure, one could think NASA just needed a place where they can simulate the conditions on Mars, but what’s the point of simulating those conditions with miniature rovers, that look and work almost nothing like their bigger brothers?

Check out the following video for further evidence (please notice the identical terrain as that from NASA’s pictures):

We have been tricked into believing the myth that Mars is the “red planet” (even though all amateur telescope pictures show otherwise), so NASA is now only perpetuating the lie.

NASA admitted on numerous occasions to alter the colors of their pictures before posting them online, so that they look more like what we would see, if we were on Mars.

But the “color tweaking” is not all they are doing to the original pictures. NASA has been caught, more than once, faking entire environments of — allegedly — Mars.

In the following video (in Spanish), we can clearly see evidence of blatant tampering with the original environment (blurring specific areas and copy-pasting the same rock again and again, in over 75% of the image):

Before concluding this article, I leave you to watch NASA’s absolutely ridiculous press conference about the alleged touch down of the rovers on Martian soil.