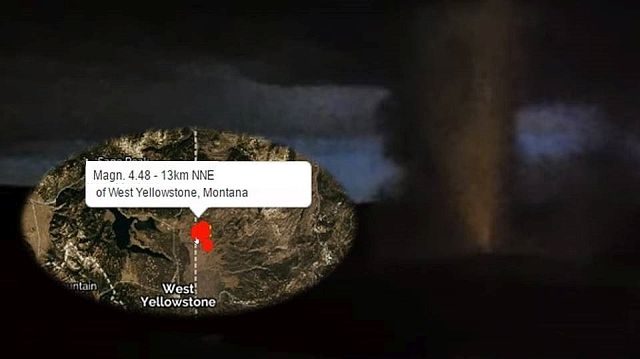 The other day we shared an article sourced from ufosightingshotspot: Flightradar24 Reveals NASA’s SOFIA Covertly Monitoring Yellowstone Super Volcano! Now just 3 days later we get a 4.5M quake at Yellowstone Super Volcano and swarms concerning enough to be tracked by scientists! Could it be waking up, no one can answer definitively..we’ll just have to wait and see how things progress.

The small earthquake that struck Yellowstone National Park on Thursday night was part of a swarm that has been hitting the area since Monday, scientists say.

The quake was centered near West Yellowstone, but was also felt by people in Gardiner and Bozeman.

“As of 10 a.m. this morning we had located a total of 235 earthquakes in the area,” said Jamie Farrell, University of Utah research professor of seismology.

Yellowstone gets about 1,500 to 2,000 earthquakes every year. About half of those come in earthquake swarms — lots of earthquakes in a small area in a short amount of time.

So this activity is fairly normal, Farrell said.

Most of the earthquakes in this swarm have been small — only four above magnitude 3. Thursday’s 4.5 magnitude earthquake was the only one reported to the U.S. Geological Survey website, meaning people actually felt it.

Not only was Thursday’s quake the largest in the current swarm, it was the largest in the area since March 30, 2014, when a 4.8 magnitude earthquake hit near Norris Geyser Basin, according to a news release from the University of Utah Seismograph Station.

Farrell said the swarm is the effect of normal tectonic stress in the Earth’s crust. As of Friday morning, his the University of Utah seismologists weren’t seeing anything volcanic in nature. Yellowstone National Park is home to a large volcano and the site of the largest and most diverse collection of natural thermal features in the world.

It’s impossible to predict when this current earthquake storm will end.

“These things could turn off in a heartbeat, or could last for months. Most go for a week or two,” Farrell said.

Farrell urges people to report any activity they feel to the USGS’s “Did you feel it” website, which help scientists record and understand shaking. People can also watch earthquake activity live at www.quake.utah.edu.