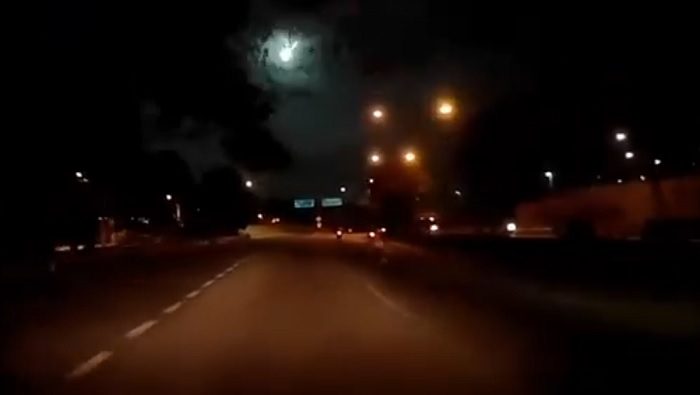 Some Malaysians and Singaporeans were lucky witnesses to a rare astronomical phenomenon when they saw a fireball fly through the sky, video of which has gone viral today.

Dashcam footage of a meteor streaking through the darkness was posted to YouTube by user Violet Crystal, who wrote that it was filmed about 5am on Wednesday in Johor Bahru.

The same clip was reposted to the All Singapore Stuff Facebook page where it has been viewed more than 100,000 times and drew comments from Singaporeans who said they also saw it from places including Loyang, Bartley, and Hougang.

“This is what I saw at Bartley this morning,” Facebook user Sky Tai wrote in a comment.

“Saw this at Loyang at 5am! Same time stamp! I thought Singapore was under attacked! [sic] Phew thank god it wasn’t an hallucination [sic],” user Izzat Asyraf Nahrawi said.

A Claudia Jiang also said she saw the fireball at around 6:40am.

“I saw it too on 11th Feb! Facing East Coast direction,” she said in the comments.

Someone else wrote that they had seen something similar a day earlier on Tuesday.

International Meteor Organization’s website notes four reports of fireball sightings at 5am on Wednesday from Singapore and Johor Bahru.

Many meteors hit the atmosphere each day, but the majority burn up before striking the surface. Similar sightings were also reported in Italy, the United Kingdom, Canada and the United States this week.

There was no record of Wednesday morning’s fireball with NASA or the European Space Agency, Singapore space enthusiasts from the Astronomy.SG group told Coconuts Singapore.

“Our team was unaware of any such incident until recently. From the video evidence, we cannot confirm the nature of the object. We do not have hard proof that it did hit the ground and there is no data from NASA and the ESA confirming it is a meteorite at this present moment. Our best guess is that it is a meteor that burned up before hitting land, or a fragment of a larger meteorite that entered the atmosphere,” the group wrote in reply.