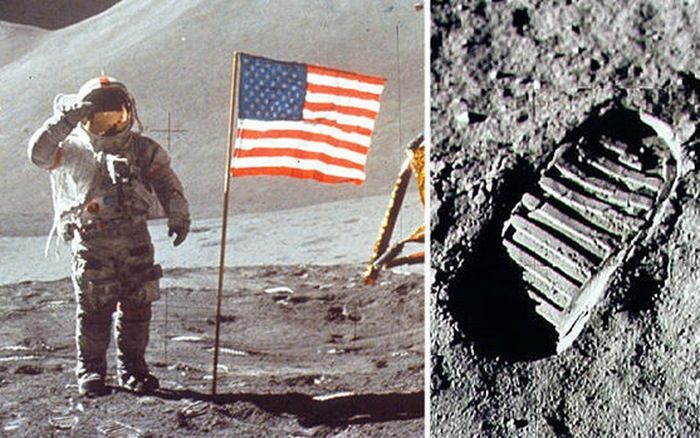 Conspiracy Theorist Claims ‘IT WASN’T POSSIBLE’, Challenges NASA to PROVE it Landed Astronauts On the Moon

The battle between believers and non believers of the moon landings continue. In my personal view it is extremely difficult to decide since both sides seem to provide compelling arguments and evidence to support their respective sides. Perhaps one day we will all come to know the truth, for now we can continue to weigh all the info. and try to find something that could lead to some convincing conclusion (that is IF you haven

NASA has been urged to provide conclusive proof once and for all that the moon landings were real and not faked.

The 50th anniversary of Neil Armstrong’s first steps on the lunar surface took place last month, but many conspiracy theorists across the globe remain convinced it was the biggest cover up of all time.

Moon hoax conspiracy theorists say a desperate President John F Kennedy, who wanted to beat the Russians in the space race to the moon, ordered the production of a series of films in top-secret studios to make it look like Nasa astronauts made it to the lunar surface.

At the heart of the theory are claims that the radioactive Van Allen belt around Earth would have been lethal to fly through.

One of the top moon hoax conspiracy theorists is Marcus Allen, the publisher of alternative news bi-monthly magazine Nexus, which is sold in around 100 countries.

Taking part in a speakers’ panel at the 27th annual Glastonbury Symposium, an annual conference dedicated to the paranormal, conspiracy theories, alternative thought, and new age philosophies, Mr Allen said: “I don’t believe man landed on the moon. If Nasa or anyone else can prove it, I am waiting to hear, because I can’t work it out.

“It is the 50th anniversary apparently, but how did they do it?

“If it was so easy in the 1960s, surely they could do it any day now, and so could Russia, Japan, India, even North Korea.”

Mr Allen went on to suggest that Nasa has since admitted – in a round about way – that it is not really possible for space travel beyond the Van Allen belt.

He said: “It wasn’t easy, there are so many difficulties to be overcome.

“NASA admitted this since in not so many words. If you read Nasa’s technological information they say we have real problems, they just don’t say they had a problem at the time.”

Nasa is next planning to send astronauts to Mars in the next 30 years or so, but Mr Allen rubbished the proposal.

He said: “They are now talking about going to Mars. It is ridiculous because anyone who tried flying to Mars would be dead in three weeks.”

Mr Allen has given many TV interviews over the years on the reasons for his beliefs.

He has often said he watched the landings live on TV and wanted to believe it happened, but since evidence that proved it didn’t happen came forward.

He, like many other moon hoax theorists, say that the rockets were launched, but never actually went to the moon, before the astronauts returned to earth.

Meanwhile, they claim the pictures and videos shown to the world had been pre-recorded in a secret studio featuring a mocked up moon surface.

They say anomalies to do with light expose they were fakes.

Mr Allen’s main argument is that the highly radioactive Van Allen belts would kill the astronauts, who were given no radioactive-proof space suits for the mission.

The radioactive environment around earth is there due to charged particles becoming trapped in the Earth’s magnetic field, which protects us from deadly radiation getting to the ground.

Because they do not dissipate into space, they have formed two nested doughnuts around us, which are between 600 and 3,700 miles above earth, and 9,300 and 12,400 miles above the planet respectively.

As the moon is around 238,000 miles from us the Apollo missions had to clear these, and conspiracy theorists claim it is still not possible today.

However, sceptical debunkers claim to have dismissed all the moon denier claims, including those about the Van Allen belt.

On popsci.com she wrote: “By February of 1964, Nasa was confident that Apollo crews would be passing through the belts fast enough that the spacecraft’s skin and all the instrumentation lining the walls would be enough protection.

“To monitor radiation exposure during the flights, Apollo crews carried dosimeters on board their spacecraft and on their persons. And these readings confirmed Nasa had made a good choice. At the end of the programme, the agency determined that its astronauts had avoided the large radiation doses many feared would ground flights to the Moon.

“Over the course of the lunar missions, astronauts were exposed to doses lower than the yearly five rem average experienced by workers with the Atomic Energy Commission who regularly deal with radioactive materials.”

Nasa does not comment on specific moon hoax claims, but has previously vehemently denied any of the Apollo missions were faked, and insists we have made it to the moon.

Do you believe the moon landing mission were real or fake? tell us in the comments below..