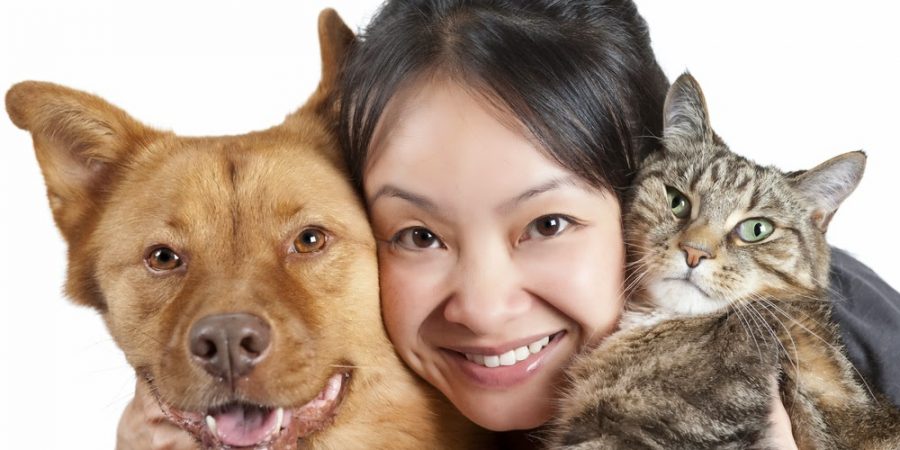 The tendency to converse with dogs, cats, and hamsters ultimately says more about people than it does about their pets.

“Do you think it’s weird that I tell Nermal I love her multiple times a day?”

My sister’s question was muffled, her face stuffed in the fur of her six-month-old kitten (named for the cat from Garfield). We were sitting in the living room of her apartment and, as always, Nermal was vying for our attention-pawing at our hair, walking along the couch behind us, spreading across our laps and looking up at us with her big, bright eyes. She’s almost aggressively cute, and inspires the kind of love that demands to be vocalized. I’d find it weirder if my sister weren’t doing so.

The question made me think about my own two cats, and our many and varied interactions throughout the day. I work from home and find myself narrating my tasks to them (“Okay, Martin, no more Twitter”) or singing impromptu songs (“It’s treat time / Time-to-eat time”). I tell them I love them; sometimes I ask them if they know how much I love them. On days spent away from my apartment, I return home and greet them by asking how their day was. It’s not like I expect them to understand or respond; it just sort of happens. I’d never really given it much thought. I don’t think I’m weird for talking to my pets like they’re human beings, if only because so many other pet-owners do the same. But why do we do it? I got the anthrozoologist and professor of psychology at Western Carolina University Hal Herzog on the phone to talk it out.

“First of all,” Herzog told me, “talking to our pets is absolutely natural. Human beings are natural anthropomorphizers, meaning we naturally tend to [ascribe] all kinds of thoughts and meanings to other things in our lives.”

Humans can do this with just about anything-one might feel bad for the colored pencil that never gets used, or get angry at the phone that won’t hold a charge, or feel real grief over news that a hitchhiking robot has been abused. But that impulse is especially strong for things that are or seem animate, like animals and AI-and when it comes to pets, people often think of them as little members of the family. So of course people talk to them. But even though it might feel like I’m talking to my pets the same way I talk to other people, studies show consistent distinctions between the two.

If people are speaking to their pets-and in anthrozoological studies, Herzog says, the pet studied is almost always a dog (he explains that this is a result of the long-standing bond between humans and dogs, and interest in the therapeutic effects of dog companionship)-they’re usually doing so in short, simple, grammatically correct sentences. Rarely do people ask open-ended questions (my asking Mila and Martin how their days were puts me in the minority, it turns out), and usually they speak in a higher-pitched voice. It’s similar to the way people speak to babies, whose big-eyed, button-nosed cuteness elicits a parental, caretaking response in us-and big-eyed, button-nosed pets spark a similar response.

But though the instinct to anthropomorphize is innate, there are circumstances that make someone more likely to do so. In a 2008 study, researchers tested two motivations for treating non-human entities like thinking, feeling humans: first, that someone lacking social interaction needs to “create” a human to hang out with; second, that someone lacking control wants to feel more secure in uncertain circumstances, and anthropomorphizing allows him to predict an animal’s action based on interpersonal experience. Both hypotheses bore out. Chronically lonely participants were much more likely to describe their pets with words suggesting those pets provided emotional support-thoughtful, considerate, sympathetic-than participants with vibrant social lives, and participants who self-identified as desiring control in their daily lives were more likely to assign emotions and conscious will to dogs they were unfamiliar with than those who were more willing to hand over the reins, as it were.

It’s no stretch to suppose that a person with few or no friends would treat a pet more like a human friend. Perhaps, too, people speak to their pets because they like to believe the animals understand, and perhaps people like to believe they understand because the alternative is kind of scary. To share a home with a living being whose mind you can’t understand and whose actions you can’t anticipate is to live in a state of unpredictability and disconnectedness. So people imagine a mind that understands, and talk to it.

But there’s more to what people-and their pets-get from these one-sided conversations. Usually, they’re not really one-sided at all.

“They give us a lot back!” says Herzog. “When you talk to them, they respond. Your dog might cock his head, give you a sort of quizzical look, like, Huh? I say ‘Do you wanna go outside?’ and my cat will come up to me and she’ll meow. I don’t think she’s processing words the same way we process words, but we have this communication system based on language.”

Beyond dogs, there’s little research on animal understanding of language, but evidence does suggest dogs process language similarly to humans. In a study led by Hungary’s Family Dog Project, dogs who went willingly into an fMRI were played recordings of their trainers, and their brains, like ours, processed familiar words in the left hemisphere and intonation on the right. It’s tricky to say dogs understand language, but they can at least recognize it. Or some of it.

But when it comes to our impulse to speak to our pets, it seems their understanding of what we say is kind of beside the point, anyway. Those who talk to their pets likely aren’t doing so because they believe those pets are processing language; they do so because they tend to see something human in them-and a pet’s cuteness and responsiveness enforce that tendency.

“I used to have pet snakes, but I hardly ever spoke to them,” Herzog said. “For one reason, snakes are deaf. I’m sure there are people who talk to their fish.”

Those who do shouldn’t feel silly for it. According to behavioral scientist Nicholas Epley, author of Mindwise: Why We Misunderstand What Others Think, Believe, Feel, and Want and one of the researchers who led the 2008 study mentioned above, talking to a pet-any kind of pet-is a sign of intelligence. It’s the same psychological process we use to recognize consciousness in other human beings, and, Epley writes, “it is a reflection of our brain’s greatest ability rather than a sign of our stupidity.”

So go ahead and ask your cat (or snake, or fern, or laptop) how its day was-it’s only human.

Arianna Rebolini is a writer based in Brooklyn. Her work has appeared in The Guardian, BuzzFeed, and Esquire.