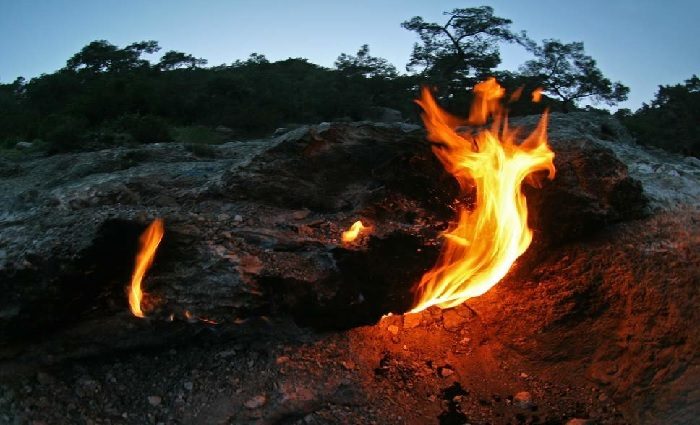 At the top of a mountain in southwest Turkey, the ground spits fire. Known as the Flames of Chimaera, they have burned for millenniums. Local myth long held that these fires were the breath of a monster – part goat, part snake, part lion.

Today we know the fuel for this flaming mountaintop is gas escaping from deep within the earth. But it does not come from the decay of ancient plant, algae or animal life, like fossil fuels.

Instead, this gas comes from a chemical reaction inside rocks. And a series of studies published by a group of international scientists known as the Deep Carbon Observatory is showing that this source of gas is more common on our planet than previously known.

“We have discovered these unusual types of methane in many, many sites. It’s not a rare phenomenon,” said Giuseppe Etiope, a member of the group who helped discover the cause of the Flames of Chimaera in 2014.

Over the past decade, the observatory’s community of scientists has found hundreds of gas deposits in more than 20 countries and several spots at the bottom of the sea that are similar to the Flames of Chimaera.

And they’ve learned that the recipe for these gas emissions is far more complex than previously thought.

“We now have a better understanding of the different way we can make methane on Earth. There’s not only the biological regime as we know it,” said Bénédicte Menez, a geomicrobiologist at the Institut de Physique du Globe de Paris.

Abiotic methane, as it’s called, does nor involve decayed plants, animals or algae trapped in sedimentary rocks, like biotic methane. The chemical reactions that produce these gasses involve water and rocks sometimes miles below Earth’s surface.

For years, Deep Carbon Observatory researchers have collected and analysed gas samples from hundreds of diverse sites. Using special tools to figure out where the methane came from, they have discovered Earth’s basic recipe: Take hydrogen from water. Mix with inorganic carbon from minerals or gas. Add another metal-rich mineral to get the process going, and voilà – abiotic methane.

The hydrogen often comes from serpentinisation, when water percolates usually through rocks from the mantle. But the recipe varies. Different sites may use different minerals or carbons sourced from their environments: Hydrogen may come from friction, or radiolysis, instead of serpentinisation. Temperatures may range from below 121C, which can still support life, to around 482C, which can not.

So the fires of Chimaera were the result of carbon-dioxide-rich limestone, or calcium carbonate and hydrogen-rich serpentinised rocks that were doused by rainwater.

By contrast, in the ocean, at sites like the Lost City hydrothermal vent field, most methane formed under the higher temperatures produced when once-buried mantle rocks were exposed and serpentinised by circulating seawater.

In each case, we see chemosynthesis – the deep-earth version of photosynthesis. Only its energy comes from a chemical reaction, not the sun. Both processes transform inorganic molecules to organic products life can use, which is the basis for all ecosystems on the planet.

In some instances, chemosynthesis also produces amino acids, the building blocks of life.

With the new tools designed to study Earth’s subsurface, researchers can determine whether methane came from ancient life or lifeless rocks. In doing so, they also reveal secrets about how life may have emerged on this planet – and the possibility for life elsewhere, like inside Mars or on the ocean floor of Saturn’s icy moon, Enceladus.

Scientists like Menez think chemosynthesis may have come before photosynthesis, and allowed for emergence of microbes that eat and produce methane. “We know that life did not emerge from scratch.” she said.

And finding parallels in the ways living microbes and lifeless chemical reactions produce methane, the microbes may contain clues about their origin too. “Early in Earth’s history life may have mimicked geological processes that naturally occurred,” she said.

In the future, the researchers hope to learn how much of this methane is out there and where is it being stored.