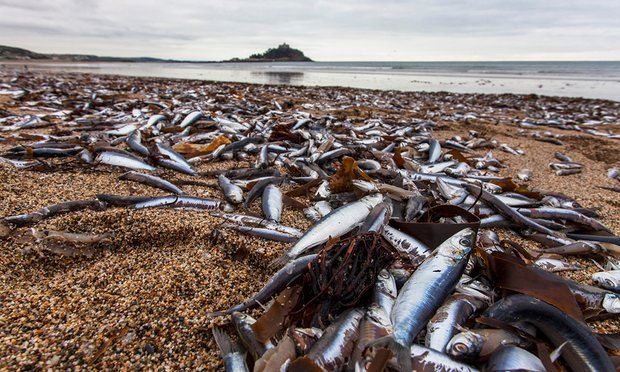 Hundreds of Thousands of Fish Wash Up on Cornish Beach

The shingle of one of the most picturesque beaches in Cornwall, Marazion at St Michael’s Mount, was covered in hundreds of thousands of dead fish at the weekend, the second time this month there has been a mass beaching of fish.

Katrina Slack, who visited the beach on Sunday intending to photograph flocks of starlings, instead witnessed an extraordinary sight, shoals of dead fish.

She told the Plymouth Herald: “The first thing I came across was a dolphin already decomposing and as I approached the shoreline, I was astonished. It was almost as if the waves were made up of thousands of shimmering fish.

The stories you need to read, in one handy email
Read more
“The closer I got I realised the beach was just covered in dead fish and more and more were coming in with every wave. It was a horrible but breathtaking scene.”

A fortnight ago the same eerie sight was witnessed on another beach, Pentewan at St Austell.

Bad weather further out to sea, attempts by the fish – mostly mackerel and pilchard – to escape large predators, or dumping by trawlers that have exceeded their quotas have been suggested as possible explanations.

Dog walkers and other witnesses at both incidents said the fish were quite fresh and not smelly, though flocks of gulls soon arrived to take advantage of the feast.

James Wright, an expert at the National Marine Aquarium in Plymouth, believes the fish washed up alive. He told the BBC such strandings were more common in summer, when mackerel follow prey into warmer, shallower water.

“It’s quite unusual for fish to want to leave the water, it’s usually a result of panic, because of a predator, but at this time of year that would be unusual.”

He suggested the weather could be a factor: “It is possible they were all caught in particularly bad weather when they were near the surface and washed up by the waves.”