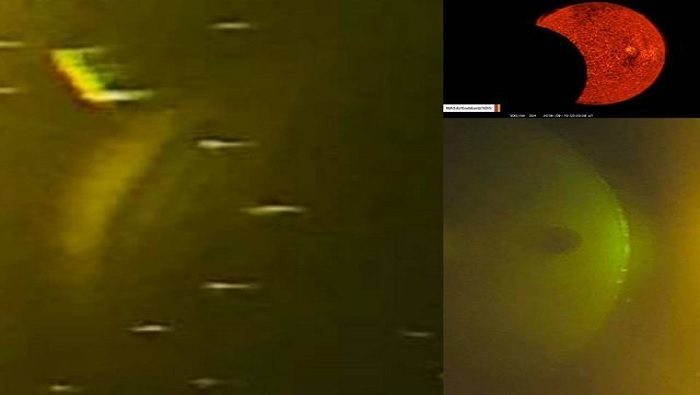 A follow up to the Mystery Surrounds Evacuation of National Solar Observatory, USPS Office in Sunspot, New Mexico

A few days ago we posted an article regarding the sudden evacuation and shutdown of the National Solar Observatory in Sunspot, New Mexico on September 9, 2018 which was said to be for “security” reasons with no further elaboration.

Interestingly on the same day as the mysterious shutdown of the observatory in NM (September 9th), NASA posted this explanation for an what appeared to be a large object passing in front of the sun:

“On Sept. 9, 2018, NASA’s Solar Dynamics Observatory, SDO, saw two lunar transits as the Moon passed in front of the Sun. A transit happens when a celestial body passes between a larger body and an observer. This first lunar transit lasted one hour, from 4:30 pm to 5:30 p.m. EDT and obscured 92 percent of the Sun at the peak of its journey. The second transit happened several hours later at 9:52 p.m. and lasted a total of 49 minutes, ending at 10:41 p.m. EDT. This transit only obscured 34 percent of the Sun at its peak.

…the Moon appears to go in one direction and then switch direction to cross the Moon again. The Moon does not, of course, actually change direction, but it appears to do so from SDO’s perspective based on the fact that the spacecraft’s orbit essentially catches up and passes the Moon during the first transit.” (source)

Here is a video of the moon’s double transit (including the reverse transit) from NASA’s Facebook page:

Now as if the one sudden closure wasn’t enough, 6 additional observatories have been also shut down.

“Just in case you were blowing off the tin-foil-hat views of the observatory closure, we note that all these solar/space cams down at the same time”:

On September 11, 2018, Maria G. Hill from Salem, Indiana has photographed something extraordinary near the sun what can be described as large disk-shaped UFOs as well as a huge fleet of smaller UFOs that accompany the massive disk-shaped UFOs.

“This is what showed up in my camera after I took a picture of the sun in the eastern sky this morning. iPhone 8 with a camera lens adapter.”

“A green circular door-like object is at the center of the vortex/worm hole and a serpent snake at the top right above it, by a circular disc. I am sure this has a symbolic meaning with the snake and the disc – pictures and videos are on my timeline” she continued.

If the objects in the images are not lens flares or objects reflecting in the lens of the camera, but massive mother ships and a fleet of smaller UFOs, see images above, then could that be the reason for the sudden shutdown of 7 solar observatories?

Watch the video of the strangeness going on there in Sunspot, New Mexico:
Video of Sunspot Observatory in NM Shows a ‘Ghost Town’, X-Files DVD & Empty Houses

This is the latest information that Sunspot Observatory has released relating to the sudden and mysterious “temporary” shutdown: 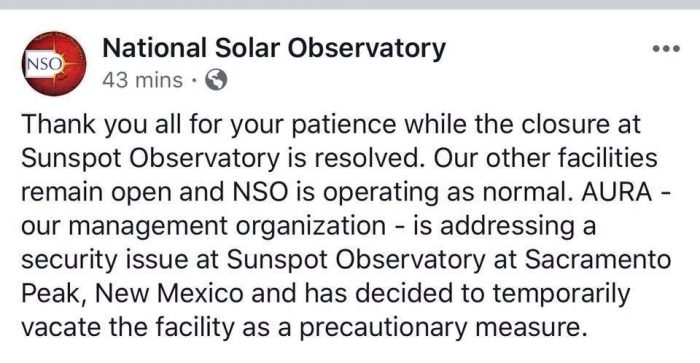