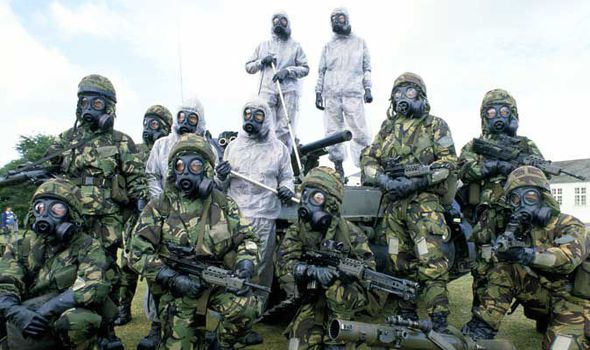 Is This The Secret Military Base Where Bodies of Aliens Were Taken?

FOR 100 years Porton Down has been the hidden-away base where research on the latest weaponry – and, some claim, the bodies of aliens – has been carried out.

Grey-green clouds of a foul-smelling gas first billowed over the Allied trenches during the second battle of Ypres in April 1915. The soldiers unlucky enough to inhale it died a horrifyingly painful death as the gas reacted with the water in their lungs to produce hydrochloric acid and the burns that ensued caused suffocation and death.

In that first attack alone 800 men died. After gas masks were distributed to troops on the front line, chlorine became largely ineffective and so the Germans resorted to mustard gas, which soaked into the soldiers’ woollen uniforms and caused terrible blisters and a lingering death.

“Devilry, thy name is Germany,” was the headline in one newspaper and it neatly encapsulated popular revulsion on the Home Front at the use of such a vile weapon. No one was more angered than Britain’s Secretary of State for War Lord Kitchener.

Caught unprepared, he immediately ordered the creation of a chemical weapons laboratory at a remote location in Wiltshire. It was called the The War Department Experimental Research Ground, Porton – but is better known today as Porton Down.

This year marks the 100th anniversary of a facility that has attracted much controversy over the years as it experimented on both humans and animals in order to unravel the secrets of the most hazardous chemical and biological agents of our age. Its reputation as the most hush-hush military base in the country even led “UFO believers” to allege that the bodies of aliens were taken there in 1974 after their craft crashed in Wales.

Earlier this year the BBC was given “unprecedented and unique access” to the complex in order to make Inside Porton Down, a look at the workings of one of our most important military and scientific research bases. It is a place where boffins in respirators and hazmat suits pore over petri dishes and test tubes.

Skulland-crossbones signs mark hazardous areas and warnings such as “Super toxic” abound. T he man charged with running an operation that employs 3,000 scientists on a 7,000-acre site with a £500million annual budget is chief executive Jonathan Lyle.

“We were formed 100 years ago to respond to the threat of chemical weapons that had emerged in the First World War,” he tells the programme-makers. “It is really important that we manage future technologies and make sure that we’re ahead of the game in terms of scientific advances that could give our Armed Forces an advantage.”

It was Porton Down that designed the gas masks that made chlorine gas largely redundant in the First World War and it is still producing the general service respirator (GSR) used by the Army today. Its duties also include disabling unexploded bombs from previous wars, a painstaking function that involves the active agent being incinerated at 180C for 24 hours. There are still thousands waiting to be destroyed and more are discovered every year.

But it is keeping abreast of potentially new threats that has always been Porton Down’s raison d’être. Following the end of the First World War, it looked at one point as if chemical weapons would be consigned to history after they were banned by the 1925 Geneva Protocol.

But Hitler let the genie out of the bottle anew with the development of a nerve agent called sarin, a lethal colourless and odourless liquid.

When evidence of its existence came to light after the war, Britain embarked on a programme to manufacture nerve gas to counter the Soviet chemical arsenal as the Cold War intensified.

After a time, the authorities concluded that animal experimentation was not sufficient to get the results it required and the decision was taken to use human volunteers. At its height, Porton Down was using 500 a year. Many human “guinea pigs” had small doses of liquid nerve gas dripped on to their skin or clothing in a gas chamber, while others breathed in the gas.

In 1953 one of the servicemen involved in the experiments, Ronald Maddison, began to sweat and complain that he felt sick. He was escorted out of the chamber and within 45 minutes he was dead. Instead of coming clean, the authorities engaged in what has been described as “one of the biggest cover-ups of the Cold War”.

It was not until 2004 that his family finally succeeded in obtaining a new inquest, which declared that Maddison had been “unlawfully killed”. But this episode did not end chemical weapons testing there.

It went on to develop an agent 170 times more potent than sarin: Venomous Agent X or VX. Just a pinhead-sized drop on the skin was enough to kill a man. Which begs the question: why make it? Lyle says: “We need to understand it and we need to be confident that all the equipment, the clothing, the gear that our operators and soldiers have got works and is effective should they ever come across something like this.”

VX turned out to be the last agent it developed as, by the end of the 1950s, its energies were redirected to the hydrogen bomb. While the great powers embraced this new form of weaponry, dictators and terrorists continued to use chemical weapons.

In 1988, for example, Saddam Hussein deployed a nerve agent for the first time in anger when he murdered thousands of people with a gas attack on the Iraqi village of Halabja. In 2013, hundreds died in a chemical attack during the Syrian Civil War on a suburb of the capital Damascus.

It was Porton Down’s tests on garment samples from the victims that proved that the agent involved was sarin.

These days Porton Down devotes much of its resources to looking into the power of bullets, missiles and IEDs (Improvised Explosive Devices), with a view to providing the Armed Forces with better protection against them. It also explores the potential for deadly viruses such as Ebola, which killed thousands of people in Sierra Leone in 2014, to be used by states or terrorist groups.

That year, Porton Down’s Biological Physical Protection Group unveiled a robot mannequin that helps test the next generation of chemical and biological suits for the UK’s Armed Forces. Over the years it has overhauled its policy towards animal testing.

“We use animals in experiments for a purpose – to give our forces the protection they need,” says Lyle. “We do it in a very regulated environment under the relevant legislation. Home Office inspectors have their own passes, who can come here at any time to examine the welfare of our animals.”

As the documentary’s presenter Dr Michael Mosley says: “Porton Down is a place of contradictions.

It is a secret institution that is trying to be more open. It was born in war but they see their primary purpose now as defensive. They have had their dark moments but they have also saved a lot of lives. The UK would be a much more vulnerable place without them.”