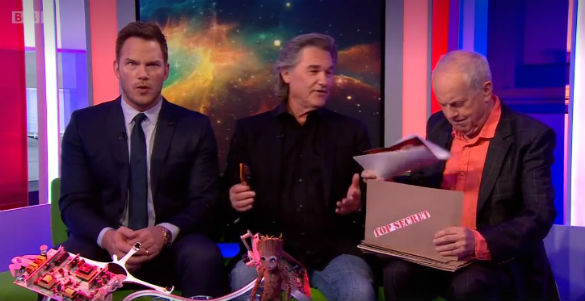 Kurt Russell claims to have witnessed a UFO above Phoenix, Arizona during one of the largest mass-UFO sightings in U.S. history. He discussed the event recently on BBC One’s, The One Show.

Russell is one of the leads in the new movie, Guardians of the Galaxy Vol. 2, which was released recently. At the end of April, Russell appeared with co-star Chris Pratt on The One Show to promote the movie. During the interview, host Gyles Brandreth brought out a folder labeled Top Secret and X-Filish music began playing. Brandreth said he had searched the international news clippings for a story Russell and Pratt may be interested in.

Brandreth told the story in the clipping about an unidentified pilot who was flying in his private aircraft with his son near an airport in Phoenix. The pilot spotted six lights in the night sky and reported this to the control tower to find out what was going on. The tower said there were no other planes in the area.

Then in a grand finale to his story, Brandreth dramatically exclaimed, “Mystery unresolved!”

During Brandreth’s telling of the story, Pratt listened, interested, but with no real reaction. However, Russell smiled coyly. As soon as Brandreth finished, Russell chimed in.

“The tail number for that plane was Bonanza two Tango Sierra, and I was the pilot,” Russell claimed, to the audible amazement of the other The One Show hosts. Pratt apparently was not aware this of this piece of information either. His reaction was to don an incredulous smirk as he listened to Russell tell more of the story. 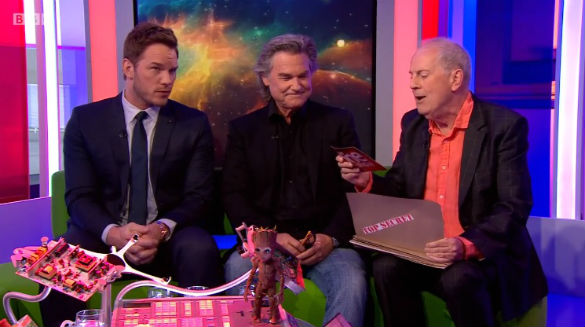 Russell explained that Oliver Hudson (Goldie Hawn’s son from her first marriage, who considers Russell his father) and he were flying into Phoenix so that Hudson could see his girlfriend.

“We were on approach and I saw six lights over the airport in absolute uniform, in a V-shape,” Russell continued.
According to Russell, Hudson asked him if he knew what the lights were, Russell said he did not and decided to call the tower. The tower said their radar did not detect anything, so Russell said he declared it “unidentified” since it was flying and appeared to be six objects.

The two then landed, Hudson got out, and Russell returned to L.A. The two never gave the incident a second thought after that, until two years later. Russell says he came home one day and Hawn was watching a TV show on UFOs that was covering a famous UFO event in Phoenix.

“That was the most viewed UFO event. Over 20,000 people saw it,” explained Russell.

Russell says as he watched the show, he “felt like Richard Dreyfuss from Close Encounters.” He felt as though for some reason he knew something about the event. The show then mentioned that a general aviation pilot reported seeing the UFO upon landing, and that is when Russell thought to himself, “that was me.”

Russell went to go check his log books, and sure enough, the flight was at the time of the UFO sighting.

“The fascinating part to me is that it just went, literally, out of my head. Oliver never mentioned it. Had I not seen that show, I would have never thought of it. That, to me, was the weird part,” Russell told the group.

Pratt, who had claimed earlier in the show to be a skeptic when it comes to UFOs, still seemed a bit hesitant, so Russell added, “It is unidentified, it is flying, and it’s an object.”

Apparently, this is the first time Russell has told this story in public. Prior to this, Russell has not been associated with the famous Phoenix UFO sighting, which took place on March 13, 1997, and is referred to as the Phoenix Lights. He did not indicate when it was he saw the UFO program that reminded of him of the incident, but my guess would be that The One Show asked the guests for any interesting space or UFO related stories they could share, and Russell certainly came up with a doozy.

You can be sure Russell’s account will be added to the narrative of the Phoenix Lights UFO event, especially if I am the one telling it.