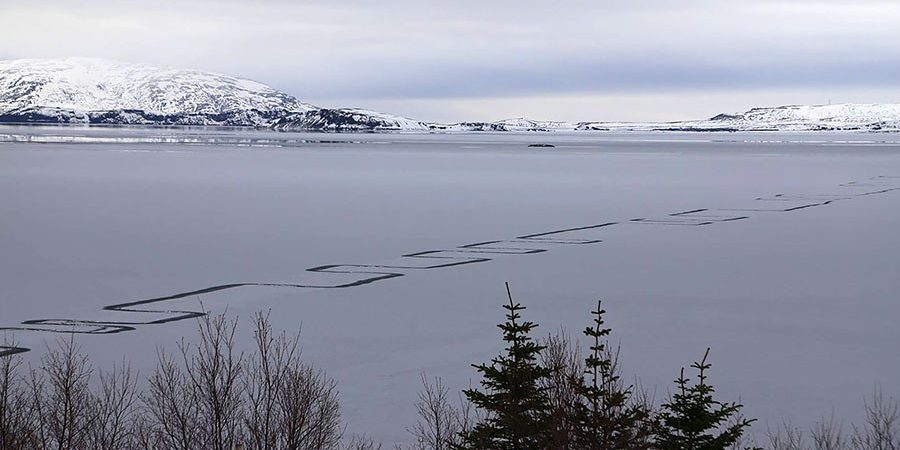 Incredible images of an unexplained and somewhat eerie zigzag pattern stretching for more than two kilometers (1.25 miles) on a frozen lake in Iceland has baffled locals, sparking theories on its source ranging from aliens to aquatic monsters.

The bizarre markings on Lake Thingvallavatn in Thingvellir National Park were shared by the park’s Facebook page earlier this month. The post reported that the unexplained pattern had been spotted by a nearby resident – a phenomenon apparently never seen in the area before.

While Lake Thingvallavatn is generally covered in solid ice until spring, warmer winters over the last 15 years have resulted in it being only partially covered, and for shorter periods.

Park official Einar AE Saemundsen noted that the striking linear patterns, which covered an area of more than two kilometers, hadn’t formed in the same region as the other cracks in the ice, reported Lonely Planet.

“Speculations started and there was no shortage of alternative explanations from alien activity and unknown monsters in the lake to strange conspiracy theories,” he said.

The mystery has now apparently been solved, however, as experts have come up with a scientific explanation for the unusual sight.

Scientists say the markings are the result of an incredibly rare phenomenon called ‘finger rafting’, which occurs when two sheets of ice on a body of water push over and under each other alternately, creating what are described as “fingers.” The natural patterns only occur when both sheets of ice are of roughly the same thickness.

This is the first time the phenomenon has been seen on Lake Thingvallavatn, according to Saemundsen.

“We show that this striking phenomenon is not a result of some peculiar property of ice but rather a general and robust mechanical phenomenon reproducible in the laboratory with other floating materials,” the study says.

Wettlaufer described the “surprising” pattern as “much like the meshed teeth of a zipper.”