Mystery of the Aramu Muru Gateway

Aramu Muru gateway is a huge mysterious door-like structure that was discovered in the Hayu Marca mountain region of Southern Peru. Hayu Marca, 35 kilometres from the city of Puno has long been revered by local indians as the “City of the Gods”, and has never been fully explored because of the rugged mountain terrain.

Although no actual city has ever been discovered, many of the rock formations of the region resemble buildings and artificial structures. The door, or the “Puerta de Hayu Marca” (Gate of the gods/spirits) has been at some time in the distant past carved out of a natural rock face and in all measures exactly seven meters in height by seven meters in width with a smaller alcove in the center at the base, which measures in at just under two meters in height. 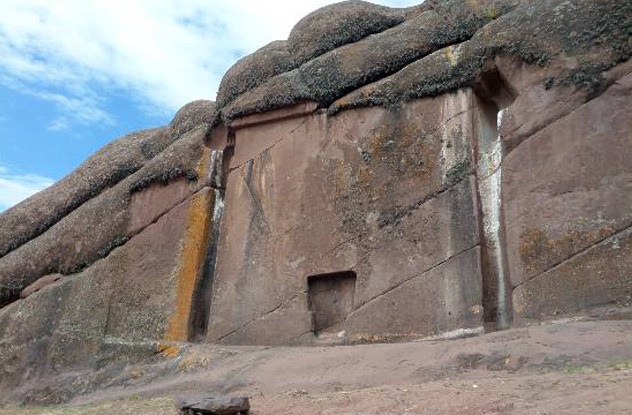 Is this an ancient stargate?

According to some individuals who have laid their hands on the small door, a feeling of energy flowing has been commented on, as well as strange experiences such as visions of stars, columns of fire and the sounds of unusual rhythmic music. Others have said that they have perceived tunnels on the interior of the structure, though nobody as yet has found a gap that would illustrate the door opening, on the contrary the professional opinion is that there is no actual door, for the frame and the entranceway and the back of the alcove are all carved from the same rock.

It is interesting to note that the structure undeniably resembles the gate of the sun at Tiahuanaco and five other archaeological sites which link together by imaginary straight lines, a cross with the lines crossing each other exactly at the point where the plateau and lake of Titicaca is located. News reports from the region over the last twenty years have indicated sizable UFO activity in all of these areas, especially at Lake Titicaca. Most of the reports describe glowing blue spheres and bright white disk shaped objects.