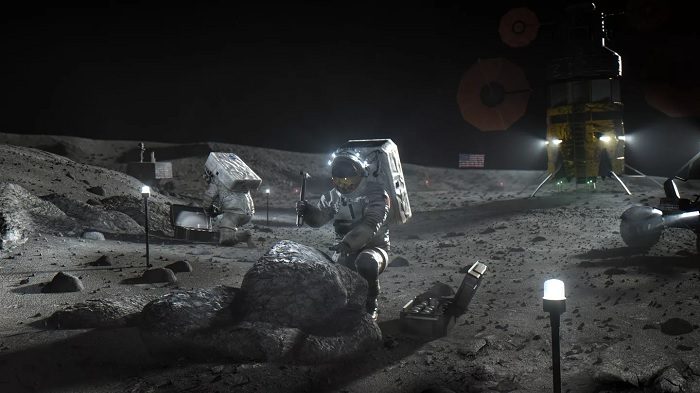 “If successful, similar systems may be used to enable long distance space travel and a potential trip to Mars.”

Humans last walked on the Moon in 1972 as part of the Apollo 17 mission. Now, NASA not only wants to return, they want to set up shop.

NASA has awarded three design contracts for a nuclear reactor that could run on the Moon in its quest to return to and eventually establish a permanent human presence.

The Department of Energy is collaborating with NASA on the project, which hopes to see not only the colonization of the Moon, but Mars as well. The plan is to have the nuclear fission reactor on the Moon by 2030 as part of the agency’s Artemis project.

The design contracts are worth $5 million each and were awarded to Lockheed Martin, Westinghouse and XI, a collaboration of X-Energy and Intuitive Machines.

The potential designs have not been revealed by the companies, but there are a few requirements the design will have to meet to be for NASA to pick the first off-world nuclear power station.

The nuclear reactor has to be powerful, capable of producing at least 40 kilowatts of power, and durable enough to run for ten years on the lunar surface. However, it also has to be small. The power station will need to be constructed on Earth and carried by a rocket to the Moon, so it has to weigh less than 13,200 pounds and fit in a 12-foot-wide cylinder.

If successful, similar systems may be used to enable long distance space travel and a potential trip to Mars. NASA says similar systems could also be used to power settlements on the Red Planet in the future. The moon base itself will also serve in a supporting role in getting humans to Mars for the first time.

Typically, rovers and other scientific equipment on the Moon and Mars are powered by solar panels. But lunar nights can last weeks, and even during the day, shadows cast by craters would make power generation difficult with solar panels. Craters have been proposed as an ideal spot for a moon base because it offers natural protection from cosmic radiation and other environmental hazards.

NASA originally planned to return humans to the Moon in 2024, but that has been pushed back to “2025 at the earliest.” If successful, the project will make history not only for establishing the first human presence on the Moon in over 50 years, it will also see the first woman in history to walk on the lunar surface.

Later this summer, NASA plans to launch Artemis I, a rocket filled with manikins (scientific mannequins meant to simulate human bodies rather than display clothes) followed by Artemis II next year, which will include human astronauts but will only fly past the Moon, and finally Artemis III, which will actually land on the Moon and will include the first female astronaut to walk on the lunar surface.

NASA also has plans to build a space station to orbit the Moon which will, among other things, help astronauts on the Moon communicate with Earth.

NASA is not the only space agency working on returning to the Moon. The China National Space Administration hopes to put Chinese taikonauts on the lunar surface by 2030. If Artemis avoids any further delays, they may find a nuclear fission station when they get there.

Do you feel there will be disclosure soon about alien existence?
Total Votes: 779