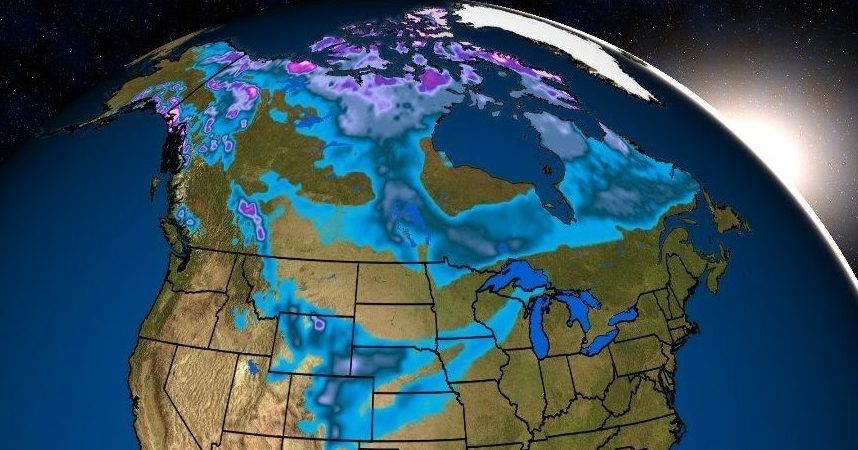 It remains a confusing thing, we hear constantly of the warming but then this stuff keeps happening too. To me it more seems like a jet stream anomaly, puzzling really…

via The Weather Channel:

Snow is Covering More of North America Than Usual for October

Meteorologist Heather Tesch looks at the snow in October.

It’s covering more of North America than it has at this time in over a decade.

Early fall has already brought plenty of winter weather to parts of North America, pushing the continent to its largest snow cover extent for mid-October in more than a decade.

The area covered by snow in North America as of Sunday was 7.77 million square kilometers (3 million square miles), according to an analysis from NOAA. No other Oct. 14 has had a snow cover extent that large in records dating to 2005. 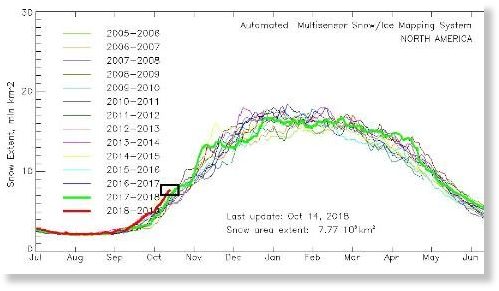 As you would expect, Canada accounts for the largest amount of snow on the ground. In the United States, parts of Alaska, the Rockies and Plains had a blanket of snow.

The flakes weren’t piling up in every northern location where October snow is common, however.

Fairbanks, Alaska, was still waiting for its first measurable snow of the season as of Oct. 14. That’s more than two weeks behind the interior Alaskan city’s average date of first accumulating snow which is Sept. 27.

Depending how the jet stream sets up deeper into fall, the extensive snowpack in North America could help boost the chances of early season cold weather in parts of the Lower 48. That’s because the snowpack can help refrigerate cold air masses and prevent them from becoming milder as they advance southward across North America from the Arctic.

“Where snow cover tends to advance most aggressively often is a precursor to where the cold air is eventually heading. Certainly, an early buildup of snow cover across Canada can support a pool of cold air that can, with the appropriate jet stream configuration, be discharged south into the United States. So I definitely believe that the rapid advance of snow cover across Canada the past month, if it continues, increases the risk of an early season cold air outbreak into the Lower 48,” said Dr. Judah Cohen, director of seasonal forecasting at Atmospheric and Environmental Research (AER).

On Sunday, Kansas City and Wichita both had their earliest measurable snow in records dating to the late 1800s. Daily record low temperatures were set Monday morning in Denver (18 degrees) and Dallas-Fort Worth (41 degrees).

Snow covered the ground across 16.7 percent of the Lower 48 states Monday morning, the largest extent for Oct. 15 in NOAA’s 15-year database. That said, much of the snow cover in the Midwest and Plains was light and will melt away quickly.

We don't usually look at this map much until, say, November. While this #snow cover will be gone soon, it's the most expansive for any Oct. 15 in NOHRSC's limited 15-year database. (2009 had 13.7% coverage.) pic.twitter.com/UbqRwJ4Ab2