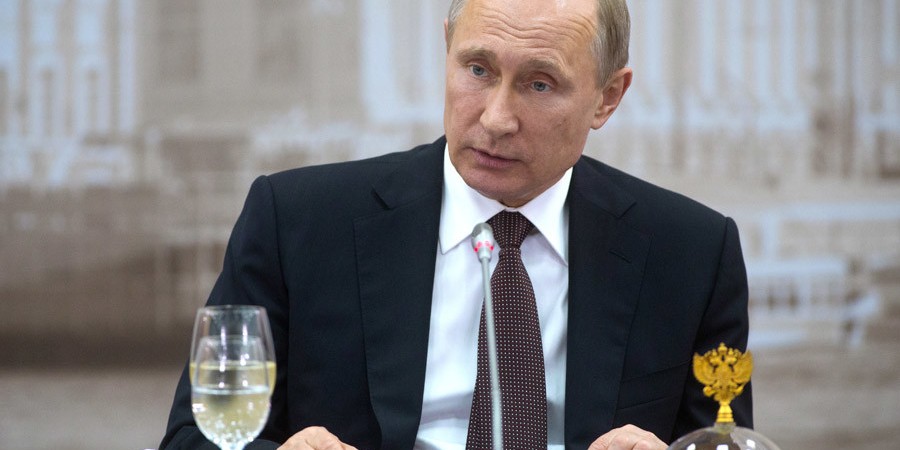 Putin: ‘We Know When US Will Get New Missile Threatening Russia’s Nuclear Capability’

The US anti-missile defense systems being installed near Russia’s borders can be “inconspicuously” transformed into offensive weapons, Vladimir Putin has said, adding that he knows “year by year” how Washington will develop its missile program.

Talking about NATO’s ballistic missile defense systems in Eastern Europe, Russia’s president said that the Americans are now deploying their missiles at these military complexes.

“The missiles are put into a capsule used for launches of sea-based Tomahawk missiles. Now they are placing their antimissiles there, which are capable of engaging a target at a distance of up to 500 kilometers [310 miles]. But technologies are developing, and we know around what year the Americans will get a new missile, which will have a range not of 500 kilometers, but 1,000, and then even more – and from that moment they will start threatening our nuclear capability,” Putin said at a meeting with the heads of international news agencies at the St. Petersburg International Economic Forum (SPIEF) on Friday.

“We know year by year what will happen, and they know that we know,” he said, adding that Western officials “pull the wool over [their news outlets] eyes,” who in turn misinform their audiences.

The main problem, according to the Russian president, is that people do not understand how potentially dangerous the situation really is. “The world is being pulled into a completely new dimension, while [Washington] pretends that nothing’s happening,” Putin said, adding that he has been trying to reach out to his counterparts, but in vain.

“They say [the missile systems] are part of their defense capability, and are not offensive, that these systems are aimed at protecting them from aggression. It’s not true,” Putin told the journalists, adding that “strategic ballistic missile defense is part of an offensive strategic capability, [and] functions in conjunction with an aggressive missile strike system.”

The “great danger” is that the same launchers that are used for defense missiles can be used to fire Tomahawks that can be installed “in a matter of hours,” Putin noted. “How do we know what’s inside those launchers? All one needs to do is reprogram [the system], which is an absolutely inconspicuous task,” he said, adding that the governments of the nations on whose territories these NATO complexes are based would have no way of knowing if this had happened.

Washington engaged in deception from the very start when it claimed that it was moving its ballistic missile defense east to counter “Iran’s nuclear threat,” Putin said, pointing out that Tehran’s alleged offensive nuclear capability now doesn’t exist – largely thanks to President Obama’s involvement. “So why have they now built a missile defense system in Romania?” he asked.

While pointing out that NATO keeps rejecting “concrete” proposals from Russia on cooperation, Putin said that US policy is now jeopardizing “the so-called strategic balance… thanks to which the world has been safe from large-scale wars and military conflicts.”

By unilaterally withdrawing from the 1972 Anti-Ballistic Missile Treaty, Washington “struck the first colossal blow at international stability,” the president said. To maintain the balance, Moscow has had to develop its own missile program in turn, to which the US agreed in the beginning of the 2000s, when Russia was in a difficult financial situation.

“I guess they hoped that the armament from the Soviet times would initially become degraded,” he said.

“Today Russia has reached significant achievements in this field. We have modernized our missile systems and successfully developed new generations. Not to mention missile defense systems,” Putin told the international news agencies, stressing that these moves are counter-measures and not “aggression,” as Moscow is so often accused of.

“We must provide security not only for ourselves. It’s important to provide strategic balance in the world, which guarantees peace on the planet… It’s the mutual threat that has provided [mankind] with global security for decades,” Putin concluded. -RT