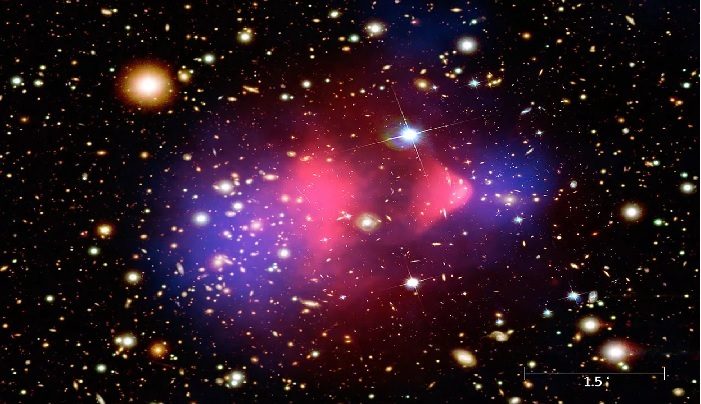 “They defy existing theories about both the origins of such objects and their characteristics,…”

Galaxy clusters are some of the largest gravitationally bound objects in the Universe. Their mergers deposit huge quantities of energy, with the detected sources of diffuse radio emission in many such collisions falling into three categories: radio relics, radio haloes, and mini-haloes.

‘Physics-defying’ radio bursts have been detected in space about 800 million light-years away by a collaboration of scientists. The large, low-frequency radio wave-emitting objects include “a fossil radio emission, a radio relic and a radio halo,” according to the study published in the journal Monthly Notices of the Royal Astronomical Society.

A complicated algorithm was applied by the scientists, led by Tessa Vernstrom of the University of Western Australia and Christopher Reisely of the Universita di Bologna, Italy, to deep, broad-band radio data from the ATCA and the Australian Square Kilometre Array Pathfinder (ASKAP), in conjunction with ancillary X-ray data from the European Space Agency’s XMM–Newton observatory. The analysis revealed the “faint to detect” objects located within the Abell 3266 galaxy cluster.

Published in #MNRAS: "Radio fossils, relics, and haloes in Abell 3266: cluster archaeology with ASKAP-EMU and the ATCA", Riseley et al. This is Fig. 1: for the caption and to read the paper visit https://t.co/sUhZB5vMWz pic.twitter.com/xu1AFL0mbI

“They defy existing theories about both the origins of such objects and their characteristics,” the team wrote in The Conversation.

As the team of scientists studied the three celestial bodies found in the Abell 3266 galaxy cluster, it found evidence of the supermassive black hole that created it. Scientists shared some images of their research and explained that vast amounts of energy is typically funneled into ionized gas or plasma when galaxy clusters collide with each other. This, in turn, generates emissions in a variety of shapes and sizes in the radio wavelength, they explained.

Thus, ‘radio relics’ are formed on a cluster’s outskirts – arc-shaped and powered by shockwaves travelling through the plasma. ‘Radio halos’, situated closer towards the center of a galaxy cluster, are driven by turbulence inside the hot plasma. And ‘fossil’ radio sources represent leftover radiation, lingering from the death of a supermassive black hole at the heart of a galaxy.

After scientists analyzed Abell 3266’s radio relic, they found that it had an unusual concave shape, unlike any radio object they had seen before, dubbing it the “wrong-way relic.”
Puzzling over the discovery, the astronomers wrote:

“Our best physical models simply can’t fit the data. This reveals gaps in our understanding of how these sources evolve – gaps that we’re working to fill.”

Speaking to the Australian Broadcasting Corporation (ABC), Dr. Verstrom noted that research like theirs allowed astronomers “to discover things we don’t know, but we have no doubt we will discover.”

“This is the beginning of the path to understanding Abel 3266 (…) The telescopes we use will lay the groundwork for the groundbreaking science of the Square Kilometer Array project. If our models don’t match the observations, there may be some kind of new physics out there that we don’t fully understand.”

The researchers involved in the study acknowledged that their findings had also raised more questions regarding the elusive cosmic entities, and that they were working to decipher the “complex physics behind these radio objects.”