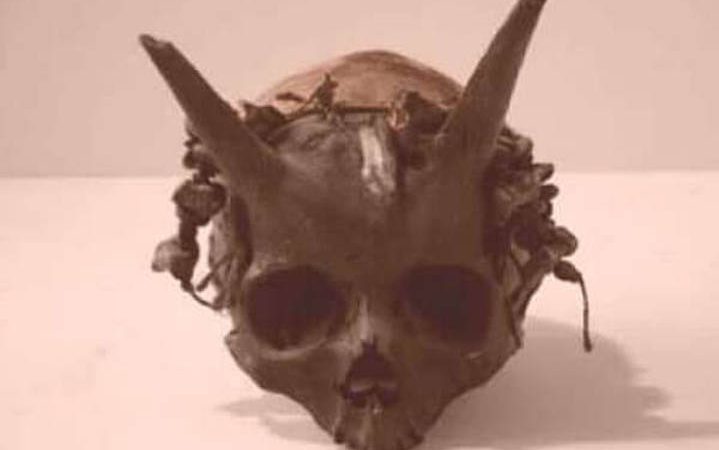 Of all the mysterious and eerie archaeological discoveries, none matches the Sayre burial mound in Bradford County, Pennsylvania.
​
The burial mound was found at the end of 19th century by the fluke of three researchers unaware of what was laying underneath their feet. The three researchers were a group of distinguished antiquarians, including the Pennsylvania state historian and dignitary of the Presbyterian Church, Dr, G.P. Donehoo, A.B. Skinner of the American Investigating Museum, and W.K. Morehead, of Philips Academy in Andover, Massachusetts.
​
Instead of finding Native American bodies at Spanish Hill, the researchers unraveled beneath the burial mound several outlandish skeletons, due to their impressive height of over seven feet.

These skeletons in particular presented another trait that has never been recorded among humans: real horns protruding from their foreheads, two inches above their eyebrows. It is estimated they had been buried in the 13th century AD.

More intriguing is the fact that the local people reported bizarre apparitions that closely resembled the horned skeletons found in the Sayre burial mound.

Like many fresh archaeological findings, soon after the skeletons were sent to the Philadelphia museum, they were allegedly “stolen” or “misplaced and lost”.
​
Apparently these pieces of history could have shed some light on the prehistoric inhabitants of North America of those days. On the other side, some claim these skeletons are the remains of beings who served for higher purposes, suggesting a culture of the Nephilim and their offspring, altogether forming the “Shining Ones,” often depicted as beings with horns.

The horns symbolize wisdom and rulership and this correlation can be seen in many shamanistic cultures, where members ornate their heads with horns. According to a theory of writer Mary Sutherland, the use of horns as garnishment in headpieces was done to display kinship with an Atlantean bloodline with the right to rule. 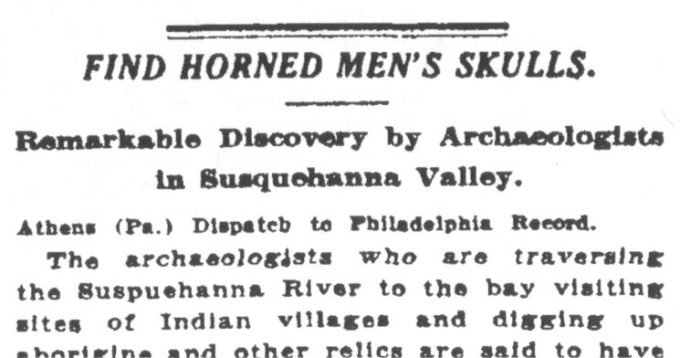 Below you can see the article that made public the story of the horned skeletons, in a page of the Moorehead expedition.
​
According to Deb Twigg, Executive Director of the Susquehanna River Archaeological Center of Native Indian Studies (SRAC), this is the headline from the earliest news article that that she could find. It is from 1916, (as opposed to the 1880′s.) This article goes on to say that this is “One of the Most Remarkable Scientific Discoveries in History Made Here – Sixty-Eight Skeletons of Men Living 700 years ago Unearthed between Sayre and Waverly” … “A Queer Fellow: He was seven feet in height. Horns protruded from his skull” …” horns of solid bone which grew straight out from the skull about two inches above the perfectly formed skull and which gave every evidence of having been there since birth.” 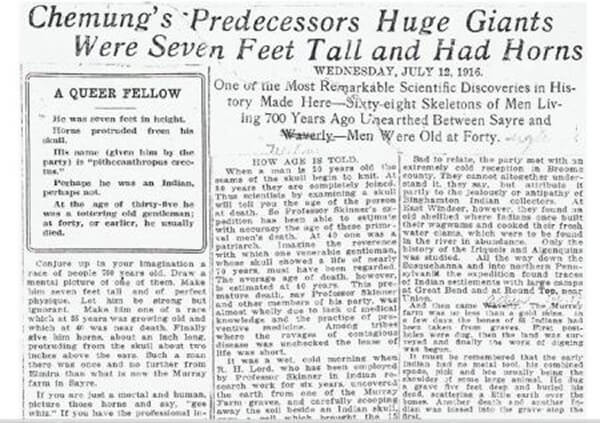 The legends of many Native Americans tell of an early race of giants responsible for the megalithic structures that can be found across all of North America. When the first settlers asked the Native Americans about the peculiar megalithic structures, they came with an answer that wouldn’t satisfy the skeptics: the entire land was inhabited a very long time ago by an ancient race of powerful people that had emerged from the sea.

Is this the pure truth that some perplexing legends hold, or a simple deceitful maneuver of the Native Americans to hide a greater knowledge that very few are chosen to understand? It is easier to lie when mixing with conservative elements of truth.

Until any traces of the “misplaced” or “stolen” skeleton exhibits are to be discovered, many questions will remain unanswered and in the need for answers, those who seek will eventually propose more elaborate and possibly more accurate theories regarding their origin, their purpose and what caused their extinction if it ever happened.

The words “Nephilim” orbit around the identity of the horned skeletal remains, but the possibilities are countless and we’ll have to wait the white coats’ final verdict, whenever it will happen.