Revisited: The US Has Given Fast-Track Approval to a Surprising New Cancer Drug

Editor’s note: We carried an article a few days ago about this new drug developed in Australia:
Australian Cancer Drug that ‘Melts’ Away’ Cancer Cells in Trials Approved for Use in U.S.

Here is the latest developments via ScienceAlert

A new cancer drug called Venetoclax is causing quite a stir in the medical community, with the announcement that the US FDA has given it fast-track approval for the treatment of patients with chronic lymphocytic leukemia (CLL).

CLL is one of the most common types of leukemia in adults, and during a recent clinical trial, 80 percent of patients treated with Venetoclax experienced complete or partial remission of their cancer.

Developed in Australia over several decades, Venetoclax is taken in pill-form, and of the small sample of patients who have been treated with it so far, some reported no adverse side-effects at all.

“It causes no side-effects. Nothing, absolutely nothing,” Robert Oblak, who had recurring CLL when he was selected to participate in the trial in 2013, told the ABC. “Quite amazing. So even when it’s killing cells, you feel great.”

Oblak estimates that he was just the 11th person in the world to be treated with Venetoclax, and within a year of treatment, he went into remission.

The phase II trial involved 107 patients aged 18 or older with CLL, who had undergone at least one type of treatment already.

The patients also had to have a particular chromosome abnormality in their leukemia cells called 17p deletion, which means they’re lacking a portion of the chromosome that acts to suppress cancer growth.

They were asked to take one Venetoclax pill per day for five weeks straight, with doses starting at 20 mg and gradually increasing to 400 mg.

At the end of the trial, which involved patients and researchers from 31 centres in the US, Canada, the UK, Germany, Poland, and Australia, four out of five patients experienced a positive result, with complete remission reported for one in five.

“These patients now have a new, targeted therapy that inhibits a protein involved in keeping tumour cells alive,” Richard Pazdur from the FDA’s Centre for Drug Evaluation and Research, announced back in April.

“For certain patients with CLL who have not had favourable outcomes with other therapies, Venclexta may provide a new option for their specific condition.”

The results of the trial, which were published in The Lancet in June, informed the FDA’s decision to fast-track approval of the drug and make it available to patients in the US.

Despite being developed by researchers at Australia’s Walter and Eliza Hall Institute of Medical Research, it’s not yet been approved for use by Australian patients, but an application has been made.

So, how does the drug work? Venetoclax is one of a new generation of immunotherapy cancer drugs that are designed to address certain failings of a person’s own immune system – such as missing portions of chromosomes that inhibit the cells’ ability to fight the spread of cancer.

In CLL patients with 17p deletion, malignant cells don’t proliferate all that much, but they don’t die, because the body’s immune response has been hindered, and abundant levels of a protein called BCL2 helps keep them alive.

“Cells, when they are born, are destined to die and cancer cells and particularly leukaemia cells delay that death by using a protein called BCL2 that stops the normal time of death,” John Seymour from the Peter MacCallum Cancer Centre in Melbourne, who helped oversee the trial, told the ABC.

“Venetoclax works by specifically blocking the action of that BCL2, and allows the cells to die in the way that they were destined to.” 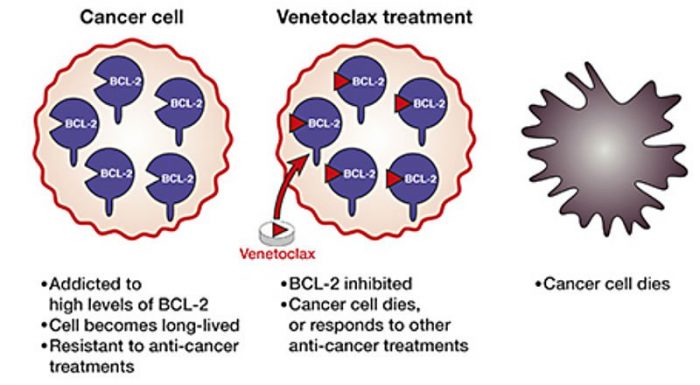 So rather than killing off the cancer cells – and a bunch of healthy cells in the vicinity – like current treatments like chemo and radiotherapy do, the drug reestablishes the balance of the body’s immune system, and effectively allows the cancer cells to die on their own.

This explains why some patients, like Oblak can undergo treatment with no discernible side-effects. But let’s be clear – Oblak was very lucky.

During the Venetoclax trial, of the 107 patients, 11 ended up dying, seven because of the progression of their cancer, and four from adverse side-effects.

Similar results were seen in a separate trial of a similar immunotherapy cancer drug, Ipilimumab, which has recently been approved for the Australian market.

While Australian patient Greg Lawson was declared free from melanomas 12 months after treatment, and reportedly suffered “virtually no side-effects”, his wife, who was treated with a different melanoma immunotherapy drug at the same time, died when her body could not tolerate the treatment.

“She had two sets of the treatment, but was so ill from the side-effects that the decision was made to take her off it,” Lawson told the ABC.

But with immunotherapy drugs seeing “extraordinary” results in other trials this year, and with the possibility of a ‘universal cancer vaccine’ hanging in the air, this is just the beginning for the next generation of cancer treatment.