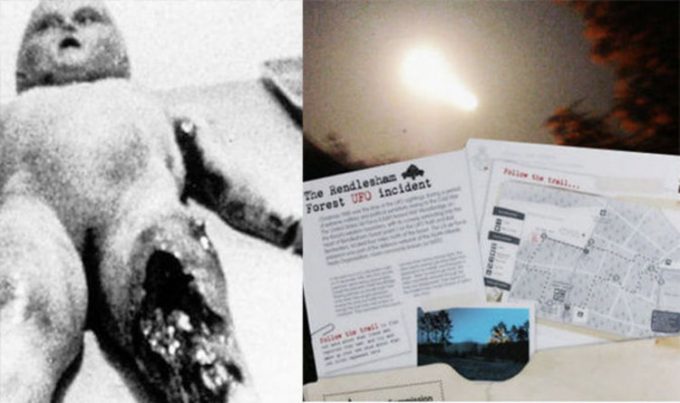 A MYSTERIOUS link between the infamous Roswell flying saucer crash and the Rendlesham UFO sighting has been alleged after Ancient Egyptian-like hieroglyphics were seen by witnesses in both cases.

Despite the crashes taking place 33 years apart UFO hunters claim to have found almost identical symbols in debris from the alleged Roswell UFO crash site in New Mexico, US, in 1947, which match signs seen on the Rendlesham orb.

The Rendlesham incident, where three US officers claimed to have seen a UFO at RAF Brentwaters in Suffolk in 1980, has been dubbed Britain’s Roswell.

It has long been claimed by witnesses to the Rendlesham incident at RAF Bentwaters, by Rendlesham Forest, near Woodbridge, Suffolk, in December 1980, that there were such markings visible on the UFO that allegedly landed in front of US Air Force staff based there.

“But fewer people know that the same hieroglyphs have arguably appeared on modern-day unidentified flying objects as well.

“As a UFO researcher, I have poured through many witness drawings and testimonies from people who’ve seen Egyptian symbols on UFOs.

“In addition, two of the most famous and well-documented UFO cases of all time have some striking similarities; despite a 30 plus year gap between them.

Pictures of hieroglyphs described by Rendlesham witnesses (left) and from Roswell (right).

“Both the 1947 Roswell UFO crash and the 1980 Rendlesham UFO Incident are associated with… you guessed it!… hieroglyphs, similar to the ones from Ancient Egypt.”

She added: “It’s been long rumoured that hieroglyphic symbols were seen on the debris of the 1947 Roswell UFO crash.

“I was lucky enough to attend a recent Roswell panel at Alien Con, where this rumour turned into fact, at least, for me.

“The grandchildren of Major General Jesse Marcel, the man who oversaw the cleanup of the debris from the 1947 crash, shared riveting new details about the event.

“One of those details was that geometric symbols appeared on the Roswell crash debris, including a triangle with a sphere on top.

“The reason I point out the triangle symbol is because it is reminiscent of what was seen on a similar UFO craft more than 30 years later in the United Kingdom, when a mystery triangle craft landed at Rendlesham, and was seen up close by Lieutenant Colonel Charles Halt and at least one other witness.

“In addition to Roswell and Rendlesham, similar symbols have shown up in modern-day crop circles and even alien abduction accounts.”

The Rendlesham mystery alien sighting happened when three US officers based at RAF Bentwaters claimed a “triangular shaped craft” landed in neighbouring woods in the early hours of December 26 1980.

The case was later investigated by the UK Ministry of Defence (MoD), but it concluded there was no evidence of alien visitations or any national security risk, and the sightings were most likely the result of beams of light from a nearby coastal lighthouse.