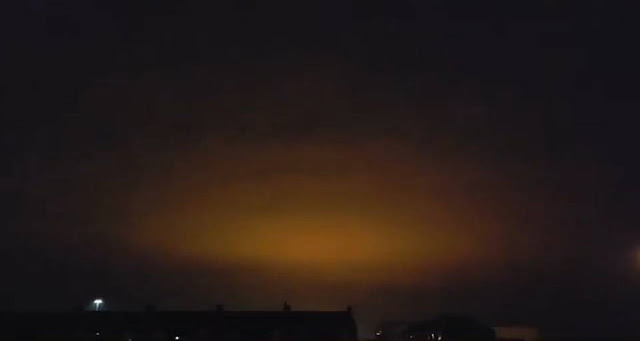 Strange Orange Glow Witnessed in the Sky over Clearfield, Utah and Middlesbrough, UK

There was also a similar type of even in Ecuador but in that case it was a more narrow or localized phenomenon. In none of these events was fire a cause, nor was it the sun, what could it be?

More and more people around the world are witnessing a strange glow in the night skies. The glow varies from orange to purple and nobody knows where it comes from.

Here are two witness reports including videos showing the strange orange glow in the night sky.

On March 3, 2018 at about 12.55 am coming home from work Nicodimus Visser saw a very strange glow in the sky. He said “I never saw a sky looking that in Clearfield or anywhere in my life.”

Nicodimus quickly made a video of the strange phenomenon and went to look for the source of the glow but found nothing what could explain the glow.

Then he thought maybe there was a huge fire, but there was no fire otherwise it would be in the news and he could have smelled it.

Several days later on March 6, 2018 the same orange glow has been spotted over Middlesbrough, England.

According to Craig Alderton who has filmed the sky phenomenon there was no fire and the glow was absolutely not coming from the street lights, moreover the glow keeps pulsating in the sky.