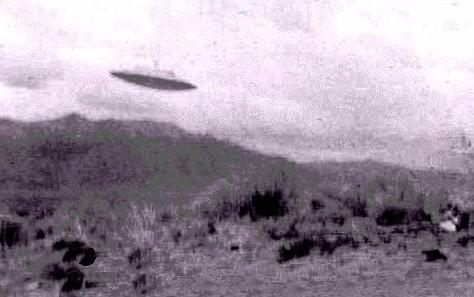 On March 20, 1966, truck driver Frank Mannor saw a pyramid-like object land in a swamp near his farmhouse in Dexter Township. When Mannor and his teenage son, Ron, went to investigate, they found the mysterious object flashing red and white lights.

Two police officers were sent to check out the UFO, but the object took off into the sky after they found it. The officers called for help and were eventually joined by 40 other policemen and some local volunteers.

While combing through the swamp, several members of the search party saw flashing bright lights in the sky. One policeman also saw a bluish UFO fly over his patrol car. The first UFO was followed by three other UFOs flying in formation.

Over the next few days, reports of UFOs and mysterious flashing lights were recorded across the state. After the sightings attracted the attention of Congressman Weston Vivian, astronomer and UFO investigator Dr. J. Allen Hynek was sent to Michigan by the US Air Force to find an explanation.

On March 25, after two days of questioning witnesses, Hynek told reporters at a Detroit conference that the sightings in places like Dexter Township and Ann Arbor were probably misidentifications of swamp gas.

Although the causes of most of those UFO sightings might have been earthly in origin, soil samples from the area where the Mannons had spotted their UFO showed radiation levels that were higher than normal. These results, which also found high levels of radiation in the water, have never been explained.