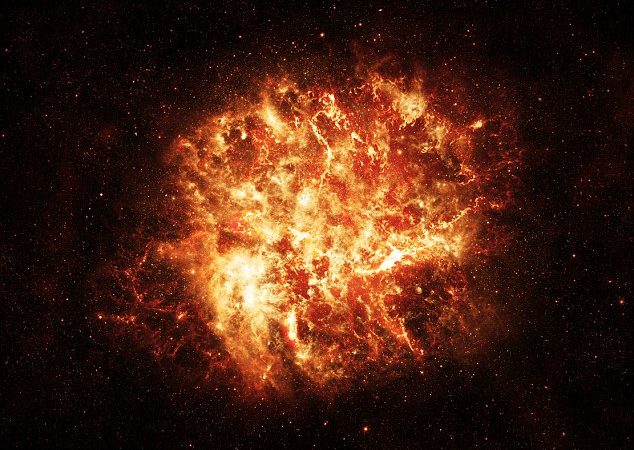 Do you enjoy a good scare?

Here’s something to think about – physicists have proposed that the Universe could have a ‘self destruct’ mechanism, whereby everything in existence could disappear forever at any time, without warning.

Yep, as the video by Kurzgesagt (at the bottom of this article) explains, if this self-destruct button turns out to be a real thing, it means we could be here one second, and gone the next, and we’d never even see it coming.

To understand this horrifying scenario, we first have to go through two of the fundamental principles of the Universe, the first being energy levels.

Basically, everything in existence has an energy level. Wood, for example, has a relatively high energy level, and this allows it to be burned to release a lot of heat energy. The ash left over, on the other hand, has a fairly low energy level.

The second fundamental principle of the Universe is stability. This describes how everything in the Universe is intrinsically drawn to its ‘ground state’ – the state where it is completely stable, and has as little energy as possible.

So if something in our Universe is unstable, it has a lot of energy, and wants to get rid of that energy to become stable. Everything in existence follows this rule – even in the weird world of quantum mechanics.

Okay, so now that we have those two principles under our belt, it’s time to talk about quantum fields, which can very simply be described as the rules of the Universe that particles must obey.

Quantum fields also follow the principles of energy levels and stability, because they want to be in the lowest energy level possible. But in this case, it’s not called the ground state, it’s called the vacuum state.

The current hypothesis is that every quantum field has reached its vacuum state – except maybe the Higgs Field, which is responsible for giving particles their mass.

As the video explains, if the Higgs Field is actually in a false vacuum, it means there’s a whole lot of potential energy waiting to be released, and a random spark could set everything off at any moment.

I don’t want to get all ‘Chicken Little‘ on you, but if the Higgs Field suddenly released all that potential energy, it would create a ball of death that expanded at the speed of light, obliterating everything in its path.

And the bad news doesn’t just stop there – this ball of death would turn the standard model of physics on its head, and destroy chemistry as we know it forever. That means life as it is right now could never rise up again once the ball of death has rolled through the Universe.

Watch the Kurzgesagt – In a Nutshell video below to find out why, and count your lucky stars that this whole scenario is just hypothetical… for now.