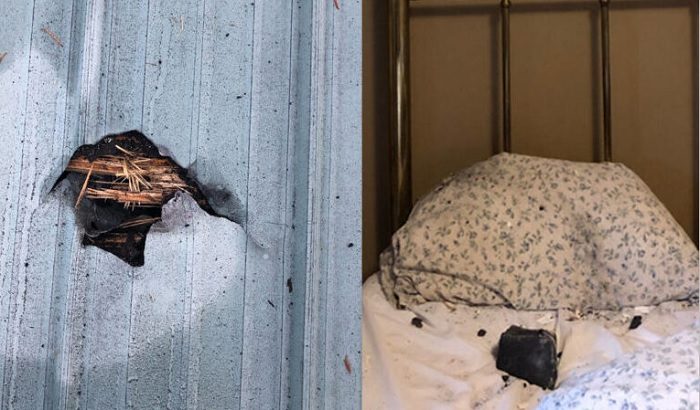 “I’m just totally amazed over the fact that it is a star that came out of the sky, It’s maybe billions of years old,”

Headline image: The hole left in the ceiling, and the space rock that created it. (Ruth Hamilton photo)

On Oct. 4, many were treated to the sight of a fireball lighting up the night sky, with images of a meteor sailing above Lake Louise striking awe.

Or at least she was until she was roughly awoken by the sound of a crash through her ceiling and the sensation of debris on her face.

“I just jumped up and turned on the light, I couldn’t figure out what the heck had happened,” said Hamilton.

She said she took a look around to get her bearings, and spotting a rock sitting neatly on her pillow next to where her head usually lays.

Hamilton called 911, unsure of what to make of the projectile. An police officer arrived on the scene, and after establishing that the rock was not there as a result of the ongoing construction in the Kicking Horse Canyon, they settled on the only other explanation – that a meteorite had come through her roof.

“We called the Canyon project to see if they were doing any blasting and they weren’t, but they did say they had seen a bright light in the sky that had exploded and caused some booms,” said Hamilton.

“I was shaking and scared when it happened, I thought someone had jumped in or it was a gun or something. It’s almost a relief when we realized it could only have fallen out of the sky.”

Hamilton says that she’s totally fine and avoided any injuries, and that she plans to keep the rock for the foreseeable future, stating that her grandchildren think it’s pretty cool.

“I’m just totally amazed over the fact that it is a star that came out of the sky, It’s maybe billions of years old,” said Hamilton.

She also says that the experience has given her a new perspective on life.

“The only other thing I can think of saying is life is precious and it could be gone at any moment even when you think you are safe and secure in your bed,” said Hamilton.

“I hope I never ever take it for granted again.”

As for the damage to her home, Hamilton says that her insurance company will be doing a walk-through to see if roof holes cause by space debris are covered. Evidently, the company has never had a claim filed quite like this before.

As for Hamilton, she has no plans to take up astrology or stargazing after her encounter.

“That’s enough for a lifetime, I think,” she said.