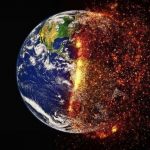 How close is human civilization to destroying the planet? The symbolic Doomsday Clock is still two minutes to midnight, as close as it has ever been, said the Bulletin of the Atomic Scientists on Thursday. The clock did not budge from last year, but that “should not be taken as a sign of stability,” said Rachel Bronson, president and CEO … Continue reading → 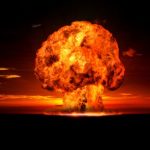 Scientists moved the hands of the Doomsday Clock closer to midnight on Thursday amid increasing worries over nuclear weapons and climate change. Each year, the Bulletin of the Atomic Scientists, a nonprofit that sets the clock, decides whether the events of the previous year pushed humanity closer or further from destruction. The symbolic clock is now two-and-a-half minutes from midnight, the closest it’s been to … Continue reading → 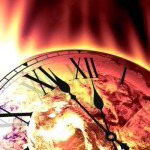 WASHINGTON (Reuters) – The Iran nuclear deal and movement on climate change prompted the scientists who maintain the Doomsday Clock, a symbolic countdown to global catastrophe, to keep it unchanged on Tuesday at three minutes to midnight. The Doomsday Clock, devised by the Chicago-based Bulletin of the Atomic Scientists, is widely recognized as an indicator of the world’s vulnerability to … Continue reading →