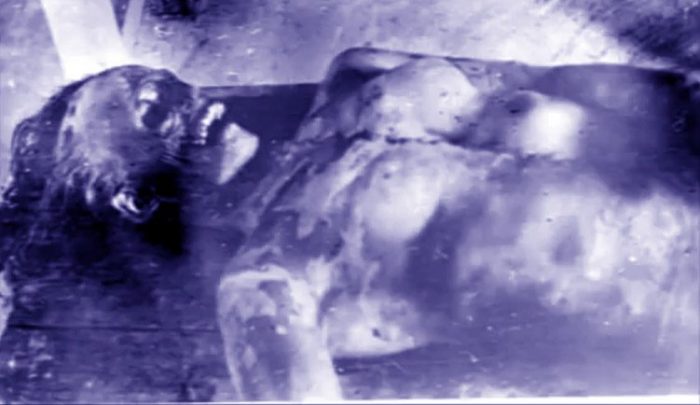 “Upon entering the plane, to check for survivors, all five crew members were found strapped in their seats, mutilated, just like cattle.” End of transcript.

Richard D. Hall, through a series of interviews with a member of an Overseas Special Operations Forces Unit, exposes the phenomena of Human Mutilations and downed UFO craft.

Many of these forces are currently suffering from, or have died from, brain tumors for some reason per his informant.

“It’s nothing like you would see in films, with big eyes and smiley faces. It looked like a Devil.”

Upon entering the craft he observed many more of these beings, along with human and animal body parts. He noted that this was just one variety of being encountered on these craft.

When pressed for details of the type of injuries sustained by these recovered corpses, he said “you just wouldn’t want to see it.” The largest recovery of bodies happened in Australia were 24 bodies had been discarded. Bodies included both adults and children.

“Internal organs would be removed and also brains”, he seemed to think that anything connected to the nervous system was desired and taken. Untold damage to the human body but not much blood on the corpses, and none remaining within what was left.

They usually selected remote, out of the way places, to carry out these human mutilations. They know where to go and whom to take from and that they would not be missed for long periods of time.

This is also true of the Missing 411 cases. Bodies are found in accessible places, up mountains, miles away from civilization or turning up later in areas that have previously been searched. Bones may be missing or all that is left.

When asked where do these craft come from he responded, “they just appear.”

Insiders have revealed over the years, that there were multiple UFO crash sites, not just the famous one involving a small group of Grey’s.

What was uncovered at the other 2 crash sites was so disturbing, it caused an immediate lock down of all information, and a complete revision of the official account.

These crashes involved larger craft with 20 plus deceased bodies observed inside each. The recovery teams reported seeing a variety of Alien species on board, apparently working together, including Bigfoot-like creatures, along with a number of Humans.

The humans were all found, strapped to tables, their upper bodies opened up, with the skin pinned down on each side, like dissected frogs.

Based on evidence collected so far, there is a high probability that this group was abducted, mutilated and later returned. Orange orbs were spotted hovering above the area were these hikers were camped.

One group was “returned” via a portal that opened inside their tent. They scratched and cut their way out and ran away as fast as they could, later succumbing to their injuries and the elements.

Others were dropped from an extreme height, via portal, sustaining massive spiral fractures to their rib cages, legs and heads, comparable to being hit by an automobile. Eyes were missing and of course a tongue.

Also, the fact that geiger counters were brought on scene, by the rescue team, suggests strongly that someone had foreknowledge of the paranormal nature of this event. All the bodies were tested and many were found to indeed be radioactive.

The Mountain has a very dark history of blood sacrifice and paranormal incidents. I found a few of these legends interesting.

One involved the conjuring of gigantic werewolves called Menkvi, used for protection against hostile enemies. Claiming that their bodies were invincible, but even if they were destroyed, there was a way to repair them and/or create new Menkvi from the body parts of the fallen ones, like robots.

Another was from a Friar, Giovanni del Plano Carpine, who observed an invading army (The Tatar / Mongols) be repelled by a cloud-like formation, that could not be penetrated.

This cloud formed between themselves and the locals they wished to conquer. The locals said The Tatar also lost their eyesight upon reaching the mountain. Attempts by the locals to penetrate the cloud were also unsuccessful.

The National Institute for Discovery Science, who purchased what is commonly known as the Skinwalker Ranch, in Ballard, Utah, observed on multiple occasions, beings and craft coming out of and going into Orbs.

“First it was just a white light, a small ball of light zipping in and out of the trees. Then they started seeing these red things, that would absolutely terrorize their animals. It would drive their cattle, literally, off a cliff.”

“Then they started seeing these things, that I call the “blue meanies. They were about the size of a softball, the exterior looks like it’s made out of glass and inside is this blue, bubbling blue liquid, and these things would literally inspire so much fear that they would feel like falling to their knees.”

“When they showed up, fear beyond anything that is rational, fear that was completely out of their mind, and it seemed like these things fed on it. That they drew energy from it, they just messed with their heads because it gave them, I don’t know, a sense of power. It literally gave them power.”

“The NIDSci Team also observed them (the orbs) through use of a scope in broad daylight. They described it this way, “you look through these things, it’s like you look into another sky.”

“That there’s a sky on the other side that is not day as it is here, it’s night time, and on occasion, things would fly in and out of these orbs, as if they are coming from some alternate reality into ours, or leaving ours, and going back to theirs.”

Another incident of note, there were two men up on Skinwalker Ridge monitoring the property from above with infrared and telescopes and two other men on the ground monitoring from below.

The guys on the ground see a dirty snowball of yellow light hovering about a foot above the ground and it’s getting bigger. They radio the guys up top and receive conformation that they too are watching it.

As this ball expands, it is also elongating until it looks like a tunnel, and the guys with the infrared began to see something inside of it.

Next a large humanoid looking creature started wriggling through the tunnel, from one side to the other, when it exited and stood up it was over 8 feet tall, black and featureless.

The tunnel collapsed upon itself and the thing began running up Skinwalker ridge and then it was gone.

You might also like to check out the first in a new series that just started: CIA Project Stargate: Part 1 – Blood Seances, Poltergeist and End Time Prophecy

YOUR DONATIONS WILL ENABLE USTO BRING YOU MORE LIKE THIS

Sources:
http://www.folklore.ee/~aado/rahvad/mansingl.htm
http://dyatlov-pass.com/death
http://old.world-mysteries.com/pstonehill_1.htm https://www.youtube.com/watch?v=f9_Xt8JvBIc https://www.youtube.com/watch?v=aKq9mURk0zo
Youtube: youtu.be/6E_67F87gpk
IF YOU ENJOY THIS SITE PLEASE TELL OTHERS ABOUT US…SHARING IS CARING
Start the discussion below..
The views expressed and information presented in this article are those of the writer and their sources – Reposting of this article is allowed, please include full attribution to this site (BENDEDREALITY.COM) and the author of this article. If you are interested in being a guest writer for our site, please CONTACT US and let us know, we would be glad to consider you for a guest writing opportunity (EXPERIENCE NOT MANDATORY).